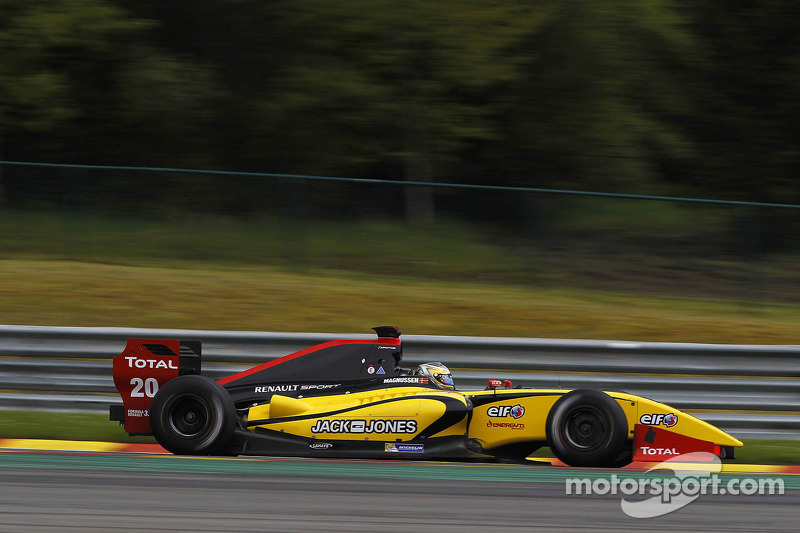 Conditions were perfect throughout the day in Austria for World Series by Renault drivers for opening day of the weekend.

Sergey Sirotkin (ISR) made the perfect start to his weekend at the Red Bull Ring by going fastest in Friday's first testing session. Kevin Magnussen (DAMS), however, was quickest in the afternoon, and it was the Dane who took the best time overall, finishing the day ahead of Marco Sorensen (Lotus) and Christopher Zanella (ISR).

Conditions were perfect throughout the morning session. Nigel Melker (Tech 1 Racing) sat atop the timesheets after 30 minutes, while his team-mate Mikhail Aleshin (Tech 1 Racing) went into the gravel trap on turn five.

Rookies Norman Nato (DAMS) and Christopher Zanella then seized the initiative, with Zanella going fastest after Yann Cunha (AV Formula) briefly held the lead. But the Swiss was ultimately outpaced by Sergey Sirotkin, his ISR team-mate, who finished the session on top with a lap of 1:17.572. The ISR pair were followed by Arthur Pic (AV Formula), Marco Sorensen and Nico Müller (International Draco Racing). Lucas Foresti (SMP Racing by Comtec), meanwhile, went off the track at the end of the session.

With five minutes remaining, Marco Sorensen wrestled first place back from compatriot Magnussen. But the latter signed off with a lap of 1:17.005, which proved to be the fastest time overall. Sorensen finished the day second, behind Magnussen, followed by Christopher Zanella, Nigel Melker and Sergey Sirotkin. The second session finished earlier than planned, after Yann Cunha went off.

Kevin Magnussen: "We didn’t do much driving in the morning, so I wasn’t able to use the new tyres. That meant I had two sets of fresh rubber in the afternoon, which definitely helps. The car didn’t seem bad at all, but lots of drivers will be fast tomorrow, too."

Marco Sorensen: "We haven’t had much luck so far this season. We know we’ve got the pace, so I’m pretty pleased to have finished in the top three. The track is great, and it’s a pleasure to drive here."

Sergey Sirotkin: "This is a good result to start the weekend, and it ensures a good working atmosphere ahead of qualifying tomorrow. It’s still too early to say just how competitive we are, and there are things we need to improve. After such a busy week, I’m trying to stay focused and get results."

World Series by Renault takes the show to Austria