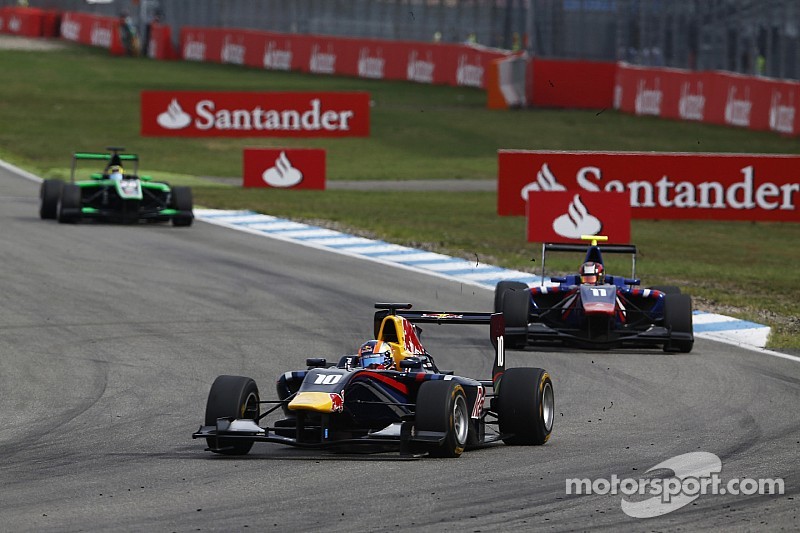 The summer break is officially over and the Series is ready to rock and roll for the final four events of the 2014 GP3 season.

This weekend the GP3 paddock sets up camp at the legendary Spa-Francorchamps circuit in Belgium, a true racer’s circuit that wets both the drivers’ and fans’ appetite with challenging high-speed corners that providing thrilling racing.

Rewind to Round 5 in Budapest and it was Richie Stanaway from Status Grand Prix who blitzed to pole and victory in Race 1 to move up to second in the Drivers’ Standings. Arden International produced their best weekend of the season to date with a victory for Patric Niederhauser in Race 2.

You never know what weather conditions are coming in Spa...

Carlin and Red Bull Junior Team driver Alex Lynn remains on top of the standings, as he has from day one. The Brit continues to pick up vital points in his quest for the GP3 title with Stanaway, Jimmy Eriksson, Emil Bernstorff and Marvin Kirchhöfer next in line to take advantage of any error made from the fast and highly consistent rookie.

There are four changes to the driver line-up for Round 6: former GP3 ace Kevin Ceccon will line up for Jenzer Motorsport in place of Christopher Höher, whilst Trident fields a brand new line-up. The Italian squad will be made of up three debutants: Russian Konstantin Tereshchenko, Swede John Bryant-Meisner and Italian Luca Ghiotto.

As ever Spa-Francorchamps brings changeable weather with rain, sunshine and hail expected to fall during this weekend just to add that extra element of surprise.

Pirelli's Racing Manager Mario Isola commented: “The task of the GP3 tyres at Spa is in some ways very different from that in Formula One, increasing the demands on our product in certain respects. One aspect that is the same for both is the actual circuit, involving high-speed, multidirectional forces, which make Spa such a thrilling experience for drivers and spectators.

Our nomination ensures that drivers in both championships will be able to push to the limit, showcasing their talents on a circuit that rewards bravery. Variable weather is a common occurrence so we are likely to see rain tyres at some point, even though the abrasiveness of the surface means there is always quite good grip even in the wet.

Spa is the longest lap of the year and with both championships starting to draw to their conclusions, every advantage gained will be crucial.”

“Spa-Francorchamps is obviously amazing. There are not many circuits that you can say are as good as or better than this one. It’s made up of loads of high-speed sweeping corners which is what most drivers really want. My favourite part of the circuit is Pouhon at Turn 12. I know a lot of people would say Eau Rouge but it’s not really a corner.

The whole circuit itself is fantastic, plus the setting and the scenery. You need to be confident with the car, confident with the track and it’s a place which favours the brave. The track is normally very hard on tyres with so many long corners. You never know what weather conditions are coming in Spa which makes it extra challenging but adds to the character of the circuit and makes it a special place to race.”

• The best rookie is Alex Lynn (Carlin) who leads the Series on 134 points.

• There are four driver changes this weekend: Former GP3 driver Kevin Ceccon (photo) will race for Jenzer Motorsport – replacing Christopher Höher. Trident field a brand new line-up with three rookies: #23 will be Russian Konstantin Tereshchenko, #24 will be Swede John Bryant-Meisner and #25 will be Italian Luca Ghiotto.