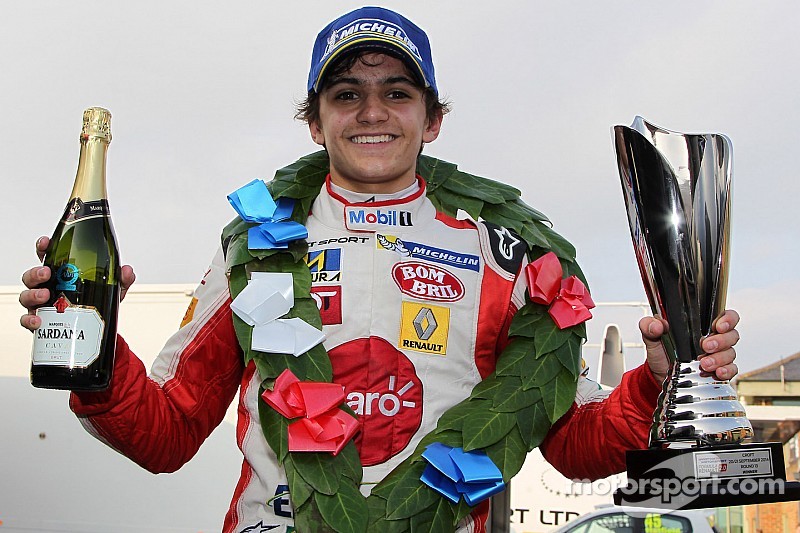 The Fittipaldi name is back on top again.

This was the weekend of Fittipaldi's. Pietro Fittipaldi was in Croft, England competing in the Protyre Formula Renault Championship while his little brother Enzo took part in a East Coast Karting Championship race in Mooresville, North Carolina (USA).

Both would emerge victorious in more ways than one.

Pietro finised second and first in the two races at Croft and in doing so, he clinched the 2014 Protyre Formula Renault title. There's still one race weekend left to contest at Silverstone but a dominating 2014 performance by Pietro has allowed him to clinch the honors early. He's won an astonishing 10 of the 13 races run thus far.

"The first race, we started second and got the lead on the first lap, but I got hit and he (Piers Hickin) was able to overtake me. He opened up a three or four second lap but I was able to catch up to him, also setting the lap record in the process."

"I was going into the second racing knowing that if I set the fastest lap and won the race, I'd win the championship and that's exactly what we did."

What does this title mean and what's next?

"It's amazing really," Pietro explained to Motorsport.com's Nick DeGroot. "Going across the line, you don't really realize it but I'm sure it will sink in tomorrow. My family made so many sacrifices for me to be here and my sponsors have been supporting me so much. It's a real team effort.

As for his 2015 plans, Pietro isn't sure what he will be doing, citing that it's up to the sponsors and that he'll be happy no matter what their decision is.

Meanwhile, Enzo was tearing it up at the GoPro Motorplex. Starting from pole position, he won the event and has effectively secured the 2014 East Coast Karting title, giving the Fittipaldi family two championships in a single day. It was also his fifth victory in seven races this year, an impressive feat.

Enzo's pace was blistering fast, as he revealed in an interview with Motorsport.com ... "In qualifying, the guy in second (Lance Fenderson) was two tenths off of me so we had a really good chance at winning and that's exactly what we did." He then added, "Winning this championship is amazing for me and it is also great for the sponsors of course."

"I feel really happy for him (Pietro), it's so cool," an enthusiastic Enzo said. "It was a really amazing accomplishment."

"He's done a great job this year and last year as well," Pietro said in his interview with Motorsport.com "Last year, he led all the laps at the Rotax Grand Nationals and qualified first. (He then) won the pre-final and finished second so he was runner-up in the national championship."

"He's just winning a lot, he's really fast, and hopefully he gets the opportunity to come race in Europe as well."

Taking it one step at a time

Talking about his Formula One aspirations, Pietro told Motorsport.com's Nick DeGroot, "It's every drivers dream to be in Formula One and it's my dream too. A lot of people ask me if I dream to be a Formula One champion and I do, that's what we're working for, but I like to take everything step-by-step."

No matter what their futures may hold, one thing is for certain, and it's that we'll be hearing a lot more about Pietro and Enzo Fittipaldi in the years to come.

Hickin on top in officially timed testing for Silverstone finale