Scott Speed wins Round 7 in Indianapolis 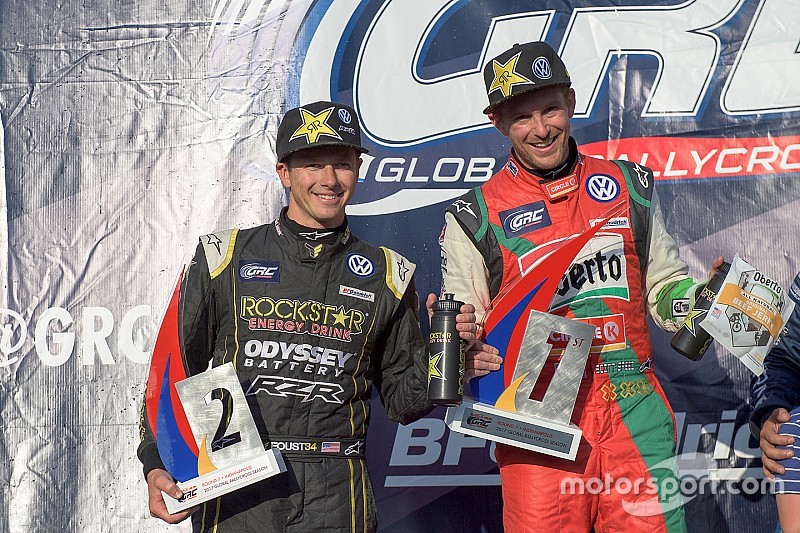 Locally based race teams were the story of the day at Red Bull Global Rallycross Indianapolis, the series’ first-ever visit to Lucas Oil Raceway. Volkswagen Andretti Rallycross’ Scott Speed and Dreyer & Reinbold Racing’s Christian Brooks took the Supercar and GRC Lites victories for their Indianapolis-based squads, with both taking their second victories of the season.

“We had a great car all weekend, from the moment we pulled it off the hauler to the last lap of the final,” Speed said. “The team did a great job and the track was unbelievably fun. This was the first time we were at a track that was predominately some sort of gravel mix, and every time we went out on the track, it was a little different. It was the most fun driving we have had yet—I’m glad that it happened here in Indy because it’s our home race and we have so many friends and family that get to come to this one.”

It was a perfect start to the weekend for Speed, who won the pole, all three of his heats, and his semifinal coming into the main. Teammate Foust, meanwhile, overcame a rocky start to the weekend to earn the second spot on the final grid by winning the other semifinal. Both managed to avoid trouble on a smoky first lap that saw multiple drivers go wheel-to-wheel and get sideways on the oval. From there, they settled in first and second, with pressure from Steve Arpin not enough to knock Foust from second place.

Scott Speed (No. 41 Oberto Circle K Beetle GRC): “We had a great car all weekend from the moment we pulled it off the hauler, until the last lap of the Final; the team just did a great job. The track was unbelievably fun. This is the first time we’ve been to a track that was predominantly some sort of gravel mix and it was just so fun because every time you went out onto the track it was a little bit different. There was water in areas there wasn’t before and the track was changing during the race. It was the most fun I’ve had driving yet. I’m so glad it happened here in Indy because it’s our home race and there was so many friends and family that were able to come to this one. I’m definitely looking forward to coming back here and big shout out to everyone at Oberto, Circle K and Expedite Home Loans.”

Tanner Foust (No. 34 Rockstar Energy Drink Beetle GRC): “Today was pretty hard. We had penalties in two out of the three heat races this weekend which had us swimming uphill. To get into the middle of the front row for the final was a big win for our team. The guys have just been cranking all year. This is just a one-race weekend and not a doubleheader, but it’s amazing how difficult it is but it’s so nice to be in Indianapolis. Last time I was here on a racetrack, I was the yellow driver for the Hot Wheels jump at the Indy 500 and that was almost as much fun as it is to race a Global Rallycross car …almost. I was so excited to see so many Indianapolis fans out here to see a new sport. We have a blast every weekend.”

Oliver Eriksson (No. 16 Honda Red Bull OMSE Civic): recapping his career-best finish of fourth: “We had a good run and we had a good pace in the semifinals, so we knew we could compete for a podium finish. We started in the middle of the second row so we knew we face carnage from other competitors. Into the first corner I got hit, but I had a big save there. I was in fifth gear, four-wide but I managed to save it. Unfortunately, I think I burnt my tires which caused my understeer. It was a tough weekend but we persevered.”

Sebastian Eriksson (No. 93 Honda Red Bull OMSE Civic): “It was a tough race because we lost it in the Semifinal. [Starting ninth] on the third row is not where you want to be in a ten-car final. I think we did an okay job from where we started. Obviously, we need to qualify better next time and have a better grid position into the Final.”

Mitchell deJong (No. 24 Honda Red Bull OMSE Civic): “It was a very difficult weekend; a lot of ups and downs. I think we had good pace at certain times and other times we had some drama with contact. A small mechanical issue caused us from not making the Semifinal and then not making the final by way of not starting a semi[final] was tough. It’s unfortunate, but things like that happen, so we just need to move on and move forward.”

The Red Bull Global Rallycross season continues on August 12-13 with the series’ second annual event at Bader Field in Atlantic City. Scott Speed will look to defend their victories in Supercar and GRC Lites, respectively, during Rounds 8 and 9 of the 2017 calendar.

Speed and Bigham win first round of GRC Indianapolis heats