Jeff Segal lead points by 29 after finishings second in Montreal 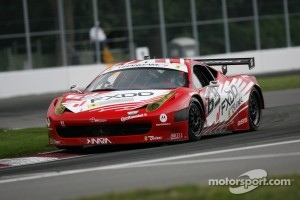 MONTREAL, Quebec, Canada (August 19, 2012) – Jeff Segal kept the heat on the competition and the championship points piling up Saturday in the Montreal 200 at Circuit Gilles Villeneuve where he finished a close second in the GRAND-AM Rolex Sports Car Series GT class with AIM Autosport Team FXDD, co-driver Emil Assentato and the No. 69 AIM Autosport Team FXDD Ferrari 458 Italia Grand Am.

The finish was a series-leading 10th consecutive GT class top-five showing for Segal, an unmatched feat in the GT class that includes an overall Rolex Series leading three race wins and six podiums in total. Even better, Segal and his teammates have built a season-high 29-point lead in both the GT driver and team championships with just two races remaining on the 2012 schedule.

“It’s a healthy lead, but as we saw at Watkins Glen, you can lose 14, 15 points in a hurry if you are not careful,” Segal said. “We are feeling good about where we are, I think we have our momentum back a little bit, but we are not going to let up for sure.”

In last week’s Continental Tire 200 at The Glen, Assentato spun and had contact with another competitor at the race start and then joined Segal and the team in fighting back to a seventh-place finish. Starting the Montreal 200 again on Saturday, Assentato wasn’t about to make the same mistake and even cautiously gave up a spot or two after taking the green flag in the fifth grid spot.

“Emil got shuffled back at the start,” Segal said. “We saw what happened at The Glen at the start when you go for it and you are a little too aggressive, and that cost us a ton. It cost us a ton of points, it damaged our car and took another front running car out. I think Emil was justifiably a little conservative at the start but he did a really good job to rebound over the next few laps.”

Assentato and AIM Autosport Team FXDD steadily moved up in the running order during the opening stint and Segal left the pits in fifth place after he took the wheel of the No. 69 Ferrari.

“We had a really strong car,” Segal said. “The car was excellent the way it was handling in practice and qualifying and in the race it was no different. It was a bit surprising after a few laps when I went for the brakes, and as I had been pushing and had traffic in front of me, the pedal went to the floor. That was a little bit of a hiccup in our plan, I had to manage the brakes carefully for five or six laps, cool them for a lap or so, and then I could push them again. That sort of dictated how much I could push in the race.”

Segal was managing his brakes and staying in touch with the leaders when opportunity knocked in the final hour of the race.

“It was pretty straight forward how I got up to third,” Segal said. “The Magnus Porsche had a mechanical problem, they lost coolant all along the back straight and pulled off, and then the Corvette spun in front of me. I had to go to the grass to get around him but that put us in third. Stellar pit work by the AIM guys put us in second. We came in for our final stop in third and came out in second, and that is all you can ask for.”

“I know their mindset right now,” Segal said. “They are no longer looking at the points, and they are not driving so much with their head as their heart, and in their position maybe we would do the same. So, they are going for wins but for us we have a championship that we are working toward, so the points are very important. I tracked the 57 car down and caught it near the end but I didn’t have a lot of confidence in what I had with the brakes. I just wasn’t going to make a move; it would have had to have been a little more straight forward for me to go for it with our position in the points right now.”

Segal, Assentato and the No. 69 Ferrari now have 332 points to lead both the GRAND-AM Rolex Sports Car Series GT Driver and Team Championships. Nearest challengers Paul Dalla Lana and the No. 94 Turner Motorsport BMW have 303 points while No. 57 Stevenson driver Robin Liddell is just one point back with 302.