No. 61 Ferrari 458 Italia - the fastest Ferrari in the field and quickest non-Chevrolet V8 car in the GRAND-AM Rolex Sports Car Series GT field.

Segal was selected to qualify the No. 61 R.Ferri/AIM Ferrari and ran at the top of the time charts throughout the timed 15-minute session. He was on what would have been is final flying lap of the only to see a sudden rain storm hit the 3.4-mile Watkins Glen road course in the final minutes of the session. 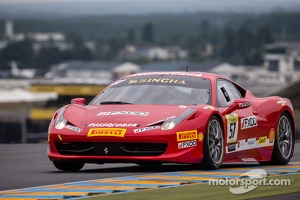 Despite not being able to quite finish his flyer, Segal still put the No. 61 R.Ferri/AIM Ferrari solidly in the field in third with a top lap of 1:52.800 (108.511 mph). The time was the fastest of the five Ferrari 458 Italias entered in the Sahlen’s and the No. 61 trails only the Chevrolet V8-powered Camaro and Corvette that swept the front row for the second straight race.

“We definitely left a little something on the table there,” Segal said. “It’s good to be in the first two rows, it is a very long race so qualifying position isn’t vital, but to be at the front is definitely helpful. It makes for a little less stress at the start.”

Papis and Segal are the full-season teammates in the No. 61 R.Ferri/AIM Ferrari. They will be joined for the second time this season by Finnish factory Ferrari driver Toni Vilander who first co-drove in the No. 61 at the season-opening Rolex 24 At Daytona.

“With the limited amount of practice and three drivers it has been pretty challenging for everybody to get up to speed,” Papis said. “Thankfully we had a pretty good baseline forthe car, the speed in qualifying was good, race pace is going to be a little more challenging and it is going to come down to strategy. I think you are going to see the best of our car at 20 laps into a stint.”

“Yesterday was my first time here and I really love the track actually,” Vilander said. “It reminds me of Mosport and other, let’s say, old-school U.S. race tracks. It is very nice but we do hope that it stays dry and it is good to be back racing straight after Le Mans. We didn’t have any easy race and now it is good to be here with R.Ferri/AIM Motorsport and will try to do a good race.”

Segal and Papis finished third in the No. 61 for their only podium showing of the season two races ago in Detroit. The addition of Vilander to a car that already appears to be on the pace at The Glen could be just the ticket to produce another top-three finish or even a victory in tomorrow’s race.

Race-day Sunday’s only on-track GRAND-AM Rolex Series activity is the featured Sahlen’s Six Hours of The Glen that is scheduled to start at 11 a.m. EDT.

Fittipaldi and Barbosa grind out victory at Watkins Glen