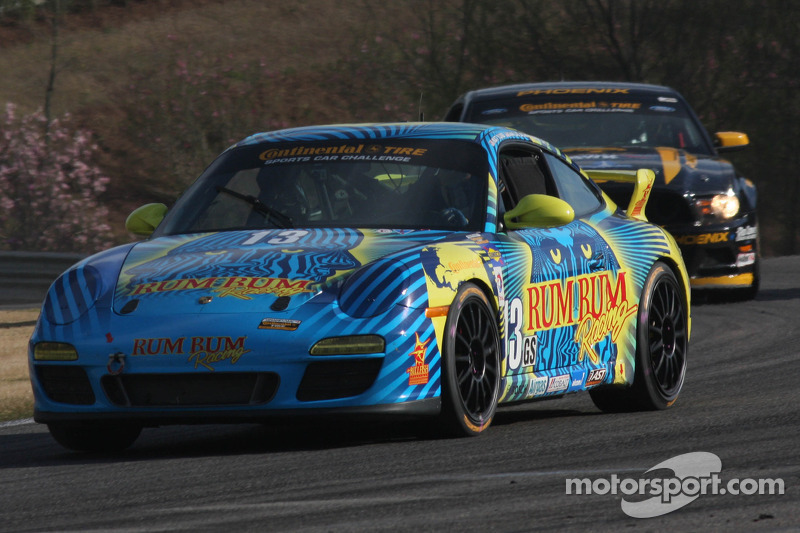 LEXINGTON, Ohio – Matt Plumb admitted having luck on his side Saturday at Mid-Ohio Sports Car Course after prevailing in a two-lap shootout that gave the No. 13 Rum Bum Racing team its 13th victory in GRAND-AM Continental Tire Sports Car Challenge competition.

Plumb beat Bill Auberlen to the checkered flag by .452 seconds to win in the Rum Bum Racing Porsche 997 started by Nick Longhi, its second victory of the season. The victory increased their lead in the Grand Sport (GS) driver standings.

“We got lucky on two fronts,” Plumb said after his 15th career overall victory in the Continental Tire Sports Car Challenge, extending his record for most all-time. “First, Nick pitted just before a caution flag came out and while the pits were still open. Second, we were on our way to running out of fuel when that late yellow came out – that literally saved us. I was happy to see the checkered flag waving. I wasn’t sure if it was the last lap until I saw the checkers – and I don’t know if I could have held off Bill for another lap.”

John DeBarros spun to a stop in Tune 11 in the No. 85 All Out Motorsports MAZDASPEED 3 to bring out the fourth and final full-course caution with nine minutes remaining. At the time, Plumb led Auberlen by 2.6 seconds.

“We were good on 20-lap sprints, but not that two-lap stuff,” said Auberlen, who co-drove the No. 96 Turner Motorsport BMW M3 with Paul Dalla Lana. “By the time our car came in, the race was over.”

John Edwards finished third in the No. 9 Stevenson Auto Group Chevrolet Camaro started by Matt Bell. The pair is second in the GS championship, trailing the Rum Bum duo by 11 points (151-140). Bryan Sellers finished fourth in the No. 48 Fall-Line Motorsports BMW M3 started by Mark Boden, followed by Shelby Blackstock and Joey Atterbury in the No. 51 Starstruck Ford Mustang Boss 302R.

Jade Buford won the pole and led the opening 36 of 83 laps in the two-hour, 30-minute race, finishing sixth in the No. 55 Multimatic Motorsports Aston Martin Vantage co-driven by Scott Maxwell.

Dyer passed Luke Wilwert in the No. 92 HART Honda to take the ST lead and led the final 38 circuits. Valiante took second and was able to quickly close to within one second of Dyer, with the two former karting rivals running in that order throughout the final hour.

“When you get to race with the best, you get to put on a great show,” Dyer said. “I’ve raced against Michael for many years, and I knew he would race me clean. That battle brought back many memories.”

Ryan Eversley and Kyle Gimple finished third in the No. 76 Compass360 Racing Honda Civic Si, followed by pole winner Jesse Combs and Jeff Mosing in the No. 56 RACE EPIC/Murillo Racing BMW 328i, and Ryan Ellis and Vesko Kozarov in the No. 33 Team Nissan/Skullcandy Nissan Altima Coupe.