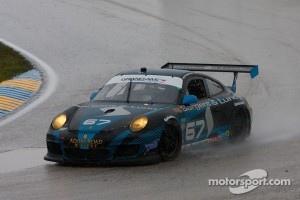 Homestead, Fla. – April 29 – The rain-soaked weekend at Homestead-Miami Speedway seemed custom-made for the quintet of GT class Porsche 911 GT3 Cup entries in the third round of the 2012 GRAND-AM Rolex Sports Car Series. However, when today's heavy rain forced officials to call the April 29th Grand Prix of Miami with 50-minutes remaining in the scheduled two-hour, 45-minute event on the 2.3-mile, 11-turn road course in Homestead, Fla., the Porsche teams were left out in the rain. The world’s leading sports car manufacturer settled for four of the top-10 positions despite being confident, had the race run its full distance, of sweeping the top spots.

The No. 67 Sergent & Lundy TRG Porsche of Steven Bertheau (Aurora, Ill.) and Spencer Pumpelly (Atlanta) took top-honors for the marque in fourth-position. All five entries finished within the top-11 of the 18-car Grand Touring (GT) class field.

Conditions had been poor in southern Florida since the start of the weekend. Qualifying, scheduled for Saturday, April 28, had to be scrubbed with the grid being set on the positions of the season-long team championship. That placed the No. 44 Flex-Box Magnus Racing Porsche of John Potter (Salt Lake City) and Andy Lally (Dacula, Ga.) on the pole position after the team won the season-opening Rolex 24 At Daytona in January. The top-starting spot was Potter’s first and the team’s second. The No. 59 Brumos Racing Porsche driven by Andrew Davis (Bogart, Ga.) and Leh Keen (Charleston, S.C.) started third in pursuit of their third-straight podium finish of the season. Bertheau would pull the No. 67 off the grid in fifth while the No. 68 TRG team car of Emilio DiGuda (Venezuela) and Jeroen Bleekemolen (Monte Carlo) took the green flag from 14th. The No. 73 Horton Autosport Porsche – which ran so strongly at the last race at Barber Motorsports Park and in practice leading into the Homestead event – began the rain-shortened race in position 17 with Patrick Lindsey (Santa Barbara, Calif.) and Eric Foss (Dallas) sharing driving duties.

After several minutes of “green flag” running behind the pace car, the field was eventually set loose on the very wet track. After nearly three days of constant – and often pounding – rain, the standing water was everywhere on- and off-course. Off the preferred racing groove, often the best place to find grip in such weather, was no help as massive puddles were sure to cause hydroplaning even on the sure-footed Porsches with their rear-weight bias helping handling and the ability to put the power down. Conditions ensured that passing would be at a premium even on a track that already is considered one of the sport’s most difficult to overtake.

Potter held the lead from the pole position and maintained it under the deplorable conditions and an onslaught of pressure from the No. 70 Mazda. He would eventually relinquish the lead when he spun in the infield where the standing water was its deepest. Davis then placed the classic Brumos Racing colors in second as the team played a waiting game with the weather and with the pit stop strategy. When the third caution of the day – including the race’s green/yellow start – flew with just over two hours remaining, the first round of pit stops shook the leading order and the driver lineup.

Lally – in pursuit of his 100th career Grand-Am podium – replaced team owner Potter while Pumpelly took the duties in the No. 67 from Bertheau. The No. 59 remained on track inheriting the lead for the first time. The running order quickly began to settle behind him.

The GP of Miami ran in order until there was one-hour, 24-minutes remaining in its scheduled duration. Just prior to what would be the race’s final green flag lap, the No. 69 Ferrari took the lead and would not relinquish it again. The constant rain grew harder with one-hour and 15-minutes to go bringing into question if the race would be run again under darkening skies. Grand-Am officials decided to wave the white flag with 55-minutes left on the clock. Another long, five-minute-lap later, the overall leading No. 10 Corvette Daytona Prototype of Max Angelelli and Ricky Taylor received the checkered-flag as did the GT class-winning No. 69 Ferrari of Emil Assentato (Locust Valley, N.Y.) and Jeff Sigal (Miami).

Pumpelly’s No. 67 TRG entry would be the first Porsche to cross the finish line taking fourth in GT, followed by Keen with the Brumos car in sixth. Lally lagged just behind in seventh with the No. 44 while the TRG’s No. 68 of DiGuida and Bleekemolen finished eighth. After a strong weekend but struggling race day, the final Porsche 911 GT3 Cup of upstart Horton Autosport ended the day with 11th, Foss piloting the car to the checker.

“We have really good luck here,” offered TRG owner Kevin Buckler referring to the team’s performance. “We just did a really serious rain setup on the car. There’s four or five things you can do to make the car just a lot better in the rain. All four drivers have been great all weekend.”

Brumos would come-up just short of adding to their string of podium finishes on the season finishing sixth after leading 15 of the 54-lap event – the most of any competitor.

“It was exciting,” understated Andrew Davis who started the No. 59 Porsche and was in the car for all of its 15 lead laps. “It was a little bit of everything. I still can’t believe all the spins and offs I saw. The Porsche always shines in the wet. It shines wet or dry but in the wet the 911 is just a great chassis. The main thing was staying out of trouble. I didn’t make any mistakes or go off. It’s such a mental exercise in the wet.”

The race would shakeup the point standings. After leading the championship entering this weekend, Magnus Racing fell to second – three markers behind the race-winning No. 69 Ferrari. Brumos Racing is five points off the lead in third while the No. 67 TRG-entry is nine points in arrears.