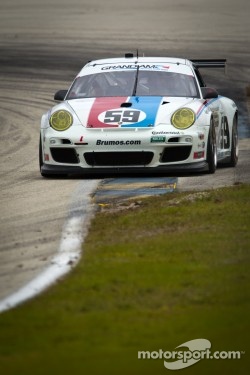 MILLVILLE, N.J., May 12, 2012 – Andrew Davis put the No. 59 Brumos Racing Porsche 911 GT3 Cup third on the GT grid for tomorrow’s Global Barter 250 presented by the Susan G. Komen for the Cure race at New Jersey Motorsports Park. Davis, of Bogart, Ga., lapped the 2.25-mile southern New Jersey-facility in one-minute, 22.394-seconds (98.308 mph). The time in today’s 15-minute qualifying session led the four-car Porsche contingent in setting the grid for the fourth round of the Rolex Sports Car Series championship. Porsche is currently tied for the lead in the GT manufacturer championship with 93 points entering the May 13, two-hour, 45-minute event.

“The entire Brumos team has been putting in a lot of hard work,” said Davis after qualifying. “It all comes to a head in qualifying and the team did a great job giving us a strong car. I was able to optimize the fist three laps and put a good time in early. I was able to get the most out of the Porsche but I don’t think we had anything for the pole winner. We should have an even better car tomorrow for the race. It’s going to be another strategic race but we are starting upfront and I think we can stay there.”

The Horton Autosport Porsche continued its strong string of GT-class races with Patrick Lindsey of Santa Barbara, Calif. qualifying the No. 73 eighth. Lindsey, who shares the car with Eric Foss of Dallas, lapped with a time of 1:23.099. Salt Lake City’s John Potter turned the 11th-quickest GT time of the session, a 1:23.365, in the No. 44 Magnus Racing Porsche. Potter co-drives with Andy Lally who is chasing his 100th-career Grand-Am podium finish this weekend. Stephen Bertheau, Aurora, Ill., qualified the No. 67 Sargent & Lundy TRG Porsche 16th with a lap of 1:27.382. Bertheau will share the California-based entry with Spencer Pumpelly of Suwanee, Ga. when the race takes the green flag tomorrow at 1 p.m. (ET).

“We really enjoy taking an active role in the Grand-Am community and this is a great cause for our team to get behind,” stated Magnus Racing team owner/driver John Potter. “Susan G. Komen for the Cure is a great organization with a strong and powerful heritage, and it’s an honor that we can be a part of it. To be honest, the car actually looks pretty awesome in pink, it seems like all of our best ideas show up at this track.”