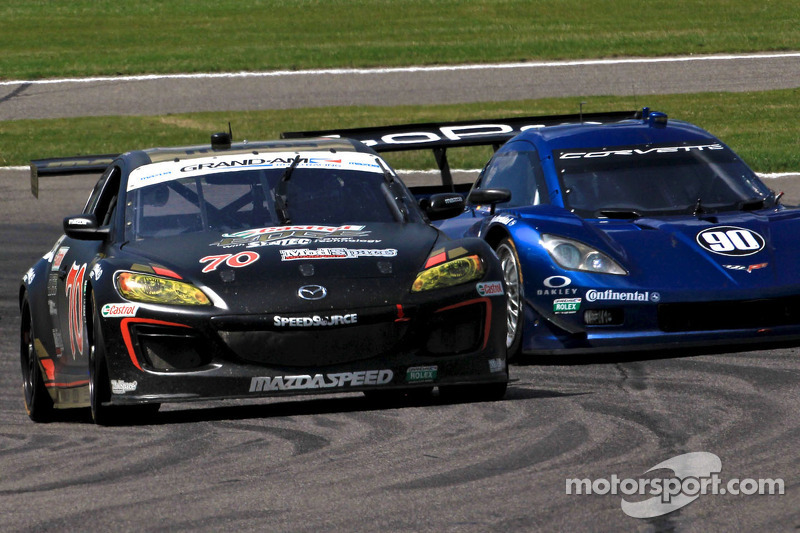 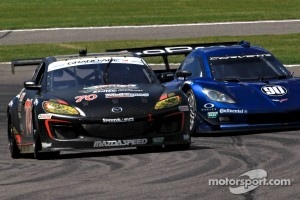 Sylvain Tremblay and Jonathan Bomarito used mind over muscle to capture the GT victory in the No. 70 SpeedSource Mazda RX-8. Qualifying eighth, pit strategy put them in position to take advantage of a late-race caution to gain a lap on the field that they held to the checkered flag.

Behind the winning Mazda, the next 11 GT cars finished on the same lap, swapping positions and trading paint throughout the closing laps. Positions two through 10 were separated by less than eight seconds at the checkered flag.

This season, two European luxury builders debuted new cars specifically for the Rolex Series – Ferrari and Audi. One of those new Ferraris, the No. 69 FXDD Ferrari 458 Italia co-driven by Emil Assentato and Jeff Segal, found its first podium on Saturday, finishing second after Segal charged from eighth to second in the closing laps. Audi got its best finish of the young season, an 11th place, by Jim Norman and Dion von Moltke in the No. 51 APR Motorsport Audi R8.

Paul Dalla Lana and Bill Auberlen finished fifth in the No. 94 Turner Motorsport BMW M3, followed by pole winner Paul Edwards and Jordan Taylor in the No. 88 Autohaus Chevrolet Camaro.

Boris Said and Eric Curran finished 12th in the 2012 debut of the March Racing Chevrolet Corvette. Fourth-generation driver Jeffrey Earnhardt, running for the 2012 GT championship, made his Barber debut. He and Chris Cook finished 18th in the No. 15 Poynt.com Ford Mustang, in Rick Ware Racing’s second race with the new car.

“They’re all in the game,” said Mark Raffauf, GRAND-AM managing director of racing operations. “The competition will be even closer when the teams have more time to work on their cars and get them right.

“Going from the season-opening Rolex 24 At Daytona to Barber was going from our fastest to one of our slower tracks – like a pair of uneven bookends. Judging from the competition at both races, I think it will be pretty close from here on out. The Audi has made great strides since Daytona and will be right up there shortly, and the Ford Mustang has also showed good improvement.”

Other new cars are on the horizon; a Dodge Viper raced in the season-opening Rolex 24 At Daytona, and is expected to return in the near future with a new team. Lotus also is considering joining the class later this year.

“We expect the GT class to continue to grow in 2013 and beyond,” Raffauf said. “We have been holding on-going talks with other European manufacturers. Don’t be surprised to see some pretty neat cars coming to race with us in the future.”

Among the international manufacturers considering a move to the GT ranks is Aston Martin, which has the Vantage currently running in the Grand Sport class of the Continental Tire Sports Car Challenge. At Barber, Joe Foster led five laps and finished second in the No. 55 Multimatic Motorsports entry – both bests for Aston Martin in GRAND-AM competition.

The next race for the Rolex Series will be the Grand Prix of Miami, set for Homestead-Miami Speedway on Sunday, April 29.