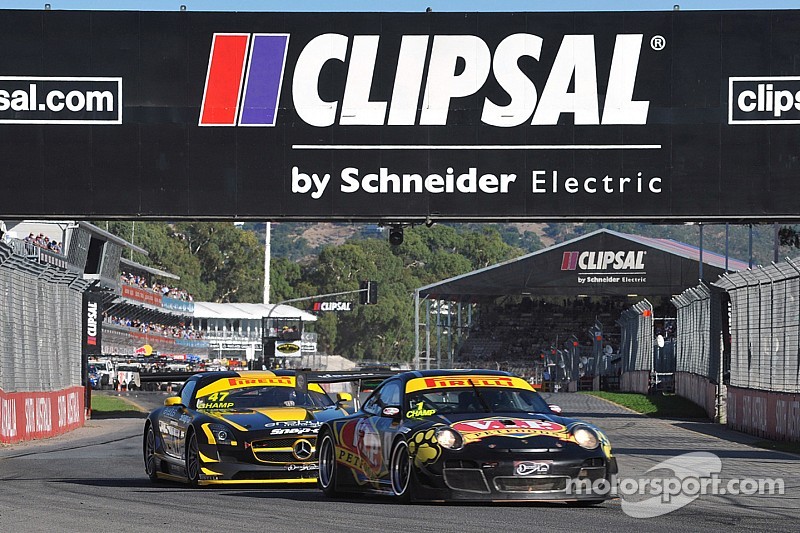 Australian GT is looking for another strong year of growth in 2015.

Whilst the Australian motorsport industry is reeling from the announcement of depleting numbers, retiring manufacturers and a general downward trend in activity, the Australian GT Championship presented by Pirelli continues to gather momentum and promises another strong season of growth in 2015 after closing out the current season with a field of 34 cars.

“We really seeming to be bucking the current national trend, and there seems to be no end in sight for the enquiries that we’re receiving,” Australian GT category manager Ken Collier admitted.

“It’s a pattern we’ve been seeing since the end of the 2013 season, and with fields of mid-to-high 20s for the bulk of the six round season this year, ahead of more than 30 entries for the final event in New Zealand, we’re clearly striking the right mix of events and race formats to continue attracting competitors.”

Season 2014 saw a mix of V8 Supercar and Nationals events, with the series once more contesting its final round at Tony Quinn’s popular Highlands Motorsport Park circuit in the Otago region of New Zealand’s South Island.

That mix will continue into season 2015, although there will be just one round on the Nationals program next year, with the running of the second Phillip Island 101, a 101-lap endurance event around the Grand Prix circuit, following a similar pattern to the now popular [non-championship] Highlands 101 event.

The schedule at a glance

The season will kick off at the V8 Supercar Clipsal 500 event in late February, just three weeks after the Bathurst 12-Hour.

The second round of the season will see the second-annual Phillip Island 101, before a string of V8 Supercar events - Townsville, Sydney Motorsport Park and the Sandown 500 - before the season-ending Highlands Motorsport Park event which will once more include the popular Highlands 101.

As was the case in 2014, events alongside V8 Supercars will see races contested across both 60-minute (two per event) and 40-minute (three per event) durations, whilst Phillip Island will include a 101-lap (approximately three-hour) endurance race. Highlands Motorsport Park will close off the Australian GT season with two 40-minute races, whilst the Sunday will include the non-championship Highlands 101.

“The depth of competition we have for the 2015 season is incredible,” Collier added. “We have three new McLaren 650S GT3s, the new Bentley Continental and the Camaro GT3, four Ferrari 458 Italias, as many as six Audi R8s, Lamborghinis, possibly two Mercedes Benz SLS AMGs, Aston Martins, Porsche GT3-Rs, a Ford GT, the new Ginetta G55 GT3, a number of GT4 Ginettas and potentially a stunning Mercedes Benz C63 GT4 as well. There’s also rumour that we will see both the new Corvette Z07.R GT3 and the latest Dodge Viper.

“At this stage from enquiries and pre-season entries we’ve already received, we look like having fields of 25-30 cars at every event, including at least 18 current-spec FIA GT3 cars.

“We also have two teams coming from New Zealand next season, and some of the Asian regions teams that are coming to Bathurst for the 12-Hour talking to us about leaving their cars here to contest a few rounds of the Australian series..

“My biggest problem now is accommodating these new entries, as some of the circuits we compete on have a grid capacity of just 32 cars, so any teams teetering on the edge of contacting us about being a part of the 2015 season, should do so immediately, as we’re starting to run out of room.. although, it is a fantastic problem to have!”

Whilst Erebus Motorsport’s Richard Muscat claimed the 2014 Australian GT crown, he is likely to move on for the 2015 season, which opens the door for a new face at the wheel of the #36 SLS AMG GT3. As for whether that face will be joined by a second Erebus entry, only time will tell, but whoever takes over the ride in the championship winning car, will have a battle on their hands.

Two-time champion Klark Quinn will be back behind the wheel of a McLaren, although this time an updated 650S GT3, but expect him to have team-mates, with not one, but two more McLarens joining the field, including one for dual Highlands 101 champion Tony Quinn. Throw in the Justin McMillan/Steve Richards Lamborghini, the Peter Edwards/John Bowe Bentley, an as-yet un-named ‘elite’ driver in the Maranello Motorsport Ferrari 458, New Zealander Jono Lester in the Trass Family Motorsport Ferrari 458 and a couple of very fast 2014-spec Audi R8s, and you have the makings of an epic outright championship battle.

There is still some discussion about who will, and who may not be returning to the Trophy Class battle for season 2015. One driver determined to return and make his presence felt will be former Challenge Class champion Jan Jinadasa, the Lamborghini driver upgrading to a newer LP560 ahead of the final round of the 2014 season, and with regular co-driver Dan Gaunt alongside, he will be tough to beat. Expect though that the Audi camp will return with a strong assault on Trophy Class honours, and there could be a few surprises on the Porsche front too.

Two-time champion Ben Foessel is expected to turn his attentions internationally in 2015, which paves the way for Brendan Cook and Matt Kingsley to go after their maiden title in their Type 997 Cup Car, but there will be ‘challengers’ including 2014 race winner Paul Van Loenhout, the West Australian retiring from active Ferrari Challenge Asia duties to focus his attentions closer to home. There are also rumours of some past Porsche regulars returning to GT, whilst reigning GT Sports champion Mark Griffith is currently planning his class debut in a Ferrari 430 GT3.

With Griffith’s progression through to Challenge class (or possibly Trophy, depending on current rumours), 2014 runner-up Tony Martin looks to have an early advantage in the predominantly GT4 class category, but looks may be deceptive as a number of new entries are making enquires about the ‘junior’ category of Australian GT. One of those is a stunning new Mercedes Benz C63, a car which has no current FIA-GT3 pedigree, but a car which matches GT4 specifications. 2015 should also see the return of the mighty Donut King Lotus Exige-R of Tony Alford after a rebuild post Sydney Motorsport Park, whilst there are rumours of more mighty Ginetta G50s coming into the category to tackle Martin should the Queenslander stay with his current mount.