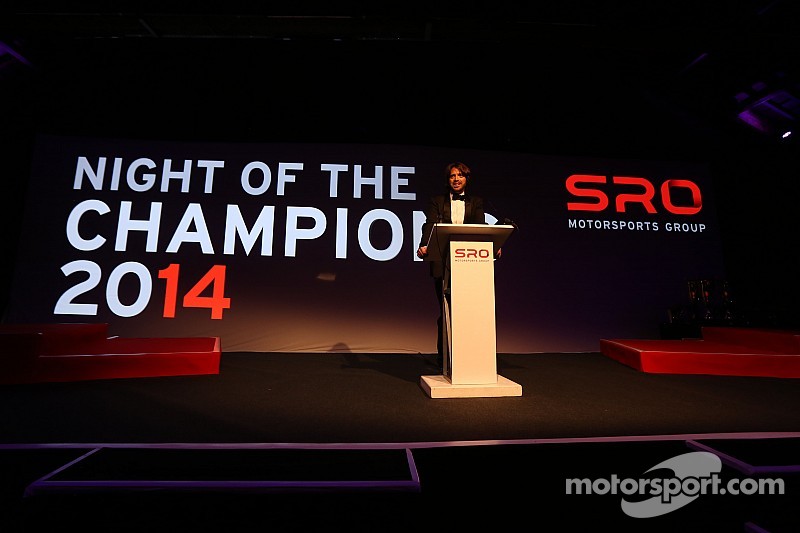 Attended by more than 400 people from all series and championships organised by the SRO Motorsports Group, the annual Award Ceremony was the perfect occasion to put this year’s excellent performances in the spotlight.

The champions of the Blancpain GT Series were of course present to collect their well-earned trophies. Maximilian Götz (Blancpain Sprint Series) and Laurens Vanthoor (Blancpain Endurance Series Pro Cup and the overall Blancpain GT Series) took the most coveted drivers’ trophies, while the Belgian Audi Club Team WRT received three trophies for the team’s victory in Sprint, Endurance as well as the overall Blancpain GT Series. They even added the team trophy in the Silver Cup of the Sprint Series. Götz, Vanthoor and Belgian Audi Club Team WRT team principal Vincent Vosse each received a magnificent timepiece from the representative of Series title sponsor Blancpain.

The top-three teams of the overall Blancpain GT Series – Belgian Audi Club Team WRT, HTP Motorsport and Grasser Racing Team – were awarded with trophies and prizes from Pirelli, the official tyre supplier of the Series. The winning team receives 42 sets of tyres to be used in the 2015 Blancpain GT Series, with 28 sets for the second-placed team and 14 for the third.

In the Endurance Series the Scuderia Villorba Corse and its drivers Stefano Gai and Andrea Rizzoli were honoured as winners of the Pro-Am Cup, while Francesco Guedes, David Mann and AF Corse received the Gentlemen Trophy’s cups. Further Blancpain Sprint Series trophies were handed over to Alessandro Latif, Marc Basseng and Phoenix Racing (Pro-Am Trophy) and the duo Vincent Abril-Mateusz Lisowski for winning the Silver Cup.

SRO Motorsports Group also introduced the Sean Edwards Trophy, which from 2015 onwards will be awarded to the best under-25 GT-driver in the Pro-Am category of the Blancpain Sprint Series. The 100.000 euros cheque that comes with the trophy should help the youngster to make the step to the Silver Cup the following season.

Now that the entertaining 2014 season has come to a close, the SRO Motorsports Group turns its attention to 2015, for the second season of the Blancpain GT Series and the inaugural editions of the GT Sports Club and Ultracar Sports Club. Action starts with the official test days of the Blancpain Endurance Series at Paul Ricard Circuit, on March 11-12th. We wish everybody a well-deserved and happy winter break and see you all in 2015!

A word from Laurens Vanthoor