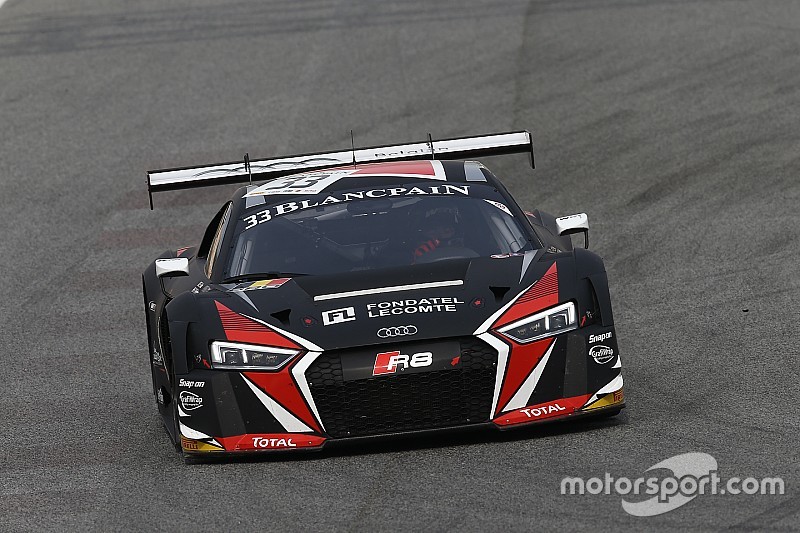 Robin Frijns and Enzo Ide scored a crucial Blancpain Sprint win in the qualifying race at Barcelona, while Maximilian Buhk and Dominik Baumann took over the overall lead after drama for Rob Bell’s McLaren.

Frijns had qualified the #33 WRT Audi R8 in third behind polesitter Franck Perera in the #74 ISR Audi and Mirko Bortolotti in the #63 Grasser Lamborghini Huracan.

As they hurtled three-wide down to Turn 1 at the start, Frijns took the inside line and managed to vault into the lead ahead of the #86 Mercedes of Jules Szymkowiak, the #63 Lambo and the #58 Garage 59 McLaren driven by Alvaro Parente.

Both Szymkowiak and Parente had to cut the first corner however, and they were subsequently penalised by the stewards with a drive-through.

That proved to be a massive blow to overall Blancpain championship leader Rob Bell, who shares the McLaren with Parente. Meanwhile, Dries Vanthoor spun into the gravel in the #4 Audi WRT.

Frijns, who is subbing for Christopher Mies this weekend, controlled the race impeccably and steadily increased the gap to Szymkowiak. After a great pitstop by the WRT Audi crew, the Dutchman handed over the #33 to Ide with a 14-second lead over Nicolas Pohler in the Grasser Lamborghini.

Following the drive-through for the #59, title rivals Buhk and Baumann had a penalty scare of their own when Baumann was released into the path of Maxime Soulet in the #8 Bentley, but the #84 Mercedes escaped punishment.

With the #86 and #59 out of the way after their penalty, the #74 ISR Audi took third with Marlon Stockinger, ahead of the #88 Mercedes of Tristan Vautier and WRT Audi duo Will Stevens and Laurens Vanthoor.

Vanthoor had taken over the #1 Audi after a great first stint by Frederic Vervisch, who started down in 18th, and muscled his way past Stevens and Vautier to fourth.

The Belgian also had a go at Stockinger for third, but sent the former GP2 driver into a spin. Vanthoor also caught and passed Pohler on the final lap, but was handed a 30-second penalty for causing a collision. That dropped Vanthoor and Vervisch down to 13th.

Ide blissfully cruised to victory, taking a convincing win for WRT Audi ahead of Pohler/Bortolotti in the #63 Grasser Lamborghini and Vautier/Rosenqvist in the #88 Mercedes-AMG. Soulet/Soucek were fourth in the #8 Bentley, followed by Stevens/Rast in the #28 WRT Audi.

Baumann/Buhk took sixth in the #94 Mercedes. After the drive-through for the #58 McLaren, the Austrian-German duo takes over the lead of the overall Blancpain GT Series. They now lead Rob Bell by six points ahead of Sunday afternoon’s main race.

Ide leads the Sprint Series with 24 points over Buhk/Baumann with only 25 points on offer.

Barcelona: Perera on pole, Ide best of the title contenders