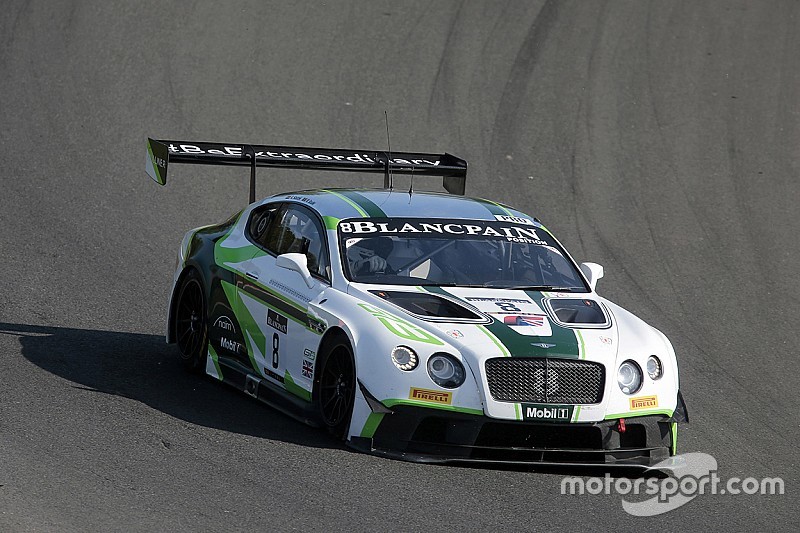 Brands Hatch - 7 May 2016 – The Bentley Boys stood on the podium for the third time this season, earlier today, as the #8 Continental GT3 finished third at Brands Hatch, the first of two championship events on British soil.

It was an incredible comeback story for Andy Soucek (ES) and Maxime Soulet (BE), who qualified in 24th place for the qualifying race. Climbing through the pack to 18th, Soucek pitted and Soulet emerged six places further ahead thanks to a pitstop that went on to win the Bentley Team M-Sport crew the Pitstop Challenge award.

Finishing the qualifying race in fifth place, the #8 team started the one-hour main race on new tyres and Soulet made an incredibly mature and confident attack on the pack to climb to second. Soucek emerged from the pits in third place on used tyres and drove fantastically to take the team’s third podium of the Series.

The #7 Continental GT3 also made good progress throughout the qualifying and main races climbing from P13 to finish in P8.

“When you start off a weekend in a less than ideal position its very easy for a team to lose motivation,” commented Bentley’s Director of Motorsport Brian Gush. “But, the Bentley team has shown this weekend that whatever hand we are dealt, we will use everything we have to get on the podium. The team has really come together and, here at Brands Hatch, we have witnessed some incredible driving and world-class pitstops. We need to take this forward to the next round at Silverstone, where we hope to repeat our race win of 2014.”

Andy Soucek, car #8: “It all came together this weekend. Qualifying wasn’t great but our qualifying race went well and we got into the top ten. The team did a great job in the pits to jump us six places and they won the award for the fastest stop, which is a fantastic recognition for the crew. The man of the weekend has to be Maxime, he did a mega job to make some great passes – something that isn’t easy to do here at Brands Hatch.”

Maxime Soulet, car #8: “We went out on new tyres at the start and I had to use them to make as many palaces as possible. The car felt incredible and I had the confidence in it to make the moves and climb through the pack. I can’t wait to do it all again next weekend at Silverstone.”