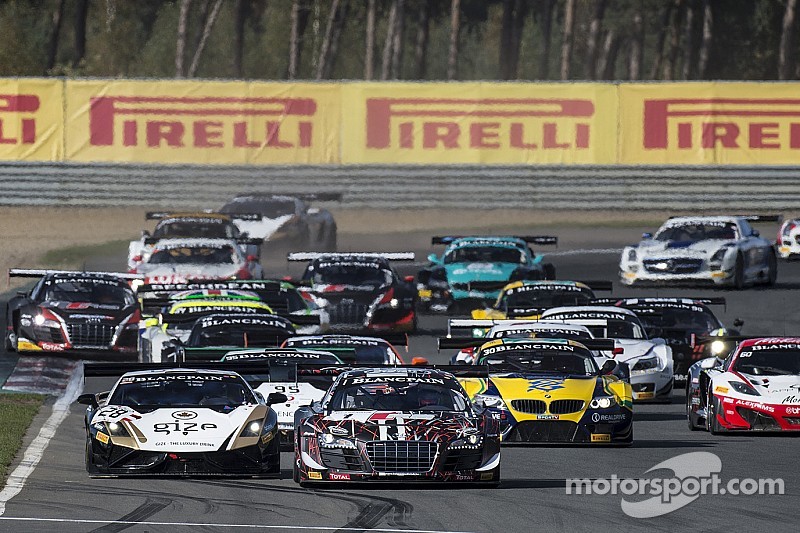 Maximilian Götz has put one hand on the 2014 Drivers title.

The prestigious Baku World Challenge forms the final round of the inaugural season of the Blancpain Sprint Series. By winning for the third time in Zolder Maximilian Götz has put one hand on the 2014 Drivers title, but Grasser Lamborghini drivers Hari Proczyk and Jeroen Bleekemolen are still in with a shot.

They will have to close a 27-point gap on the Azeri street circuit, a task made more difficult by the added presence of several high-level GT-teams, which will fill all 30 places on the starting grid in Baku.

Three wins, one second place and every Qualifying or Main Race a points finish: Maximilian Götz has had an excellent run in the 2014 Blancpain Sprint Series. With 34 points up for grabs on the streets of Baku (1 for pole position, 8 in the Qualifying Race and 25 in the Main Race) the 28-year-old German – who shared the #84 HTP Motorsport Mercedes with Maximilian Buhk at every round but one – is now very close to the title.

However, one stroke of bad luck on the 3,864 km Baku street circuit could see his 27-point lead melt like snow in the sun. On the other hand, if Götz manages to finish in front of the Lamborghini of Proczyk and Bleekemolen in the Qualifying Race, he could clinch the title before the start of the Baku Main Race.

In the overall Teams Classification, it is already certain that the title fight will only be decided in the Main Race. HTP Motorsport has a 10-point lead over the Belgian Audi Club Team WRT – the various cars from the Belgian squad scored points in every race – but the Grasser Racing Team is still in the running as well. With a 21-point deficit, the Austrian team will need at least one podium finish to claim the teams’ title.

In the Silver Cup, victory in Zolder has given Belgian Audi Club Team WRT-drivers Vincent Abril and Mateusz Lisowski a comfortable lead on the eve of the final round of the 2014 season. Only ROAL Motorsport-pairing Fumanelli-Colombo could deny them the title (in both Drivers and Teams Classifications), but if Abril and Lisowski finish in front of the BMW-duo in the Qualifying Race, the die is cast.
With the Pro-Am title being decided at the Belgian round, Alessandro Latif and Marc Basseng can now fully focus on claiming a fifth Main Race win of the season.

Focussing on the win is something that plenty of teams participating in the Baku World Challenge will be doing. The attractive prize money (100.000 euro for the overall winning team, 50.000 for the second placed team, and 25.000 for the team third) has drawn the attention of plenty of top-notch GT-teams and drivers.

Beechdean AMR and GT Russian Team were already present in Zolder to prepare for the Azeri season finale, but they will be joined by no fewer than seven teams that are new to the Blancpain Sprint Series. Two of them were present in some or all of the Blancpain Endurance Series races this year. Boutsen Ginion Racing will bring two McLaren MP4-12C to Baku, while Triple 888 Racing will enter a BMW Z4 in the Silver cup, for talented youngsters Ryan Ratcliffe and Joe Osborne.

Some Series’ regulars have also slightly altered their line-up – BMW Sports Trophy Teams Brazil and Schubert, together with Fortec Motorsports – bringing the total of Platinum drivers at the start of the Baku World Challenge to an astonishing 17. Add to that the 18 drivers with Gold status, and it is clear that the quality of racing at the Baku World Challenge will be of an unprecedented high level.

The Baku World Challenge also forms the final chapter of the inaugural Blancpain GT Series, the series that combines both Endurance and Sprint. Two drivers are still in the running for the title: Maximilian Buhk and the Blancpain Endurance Series Pro champion Laurens Vanthoor. The Belgian has scored 23 fewer points than the German, so if Buhk can extend that lead by two more points by the end of the Qualifying Race, the title will be his even before the start of the Main Race.

In the team classification the situation is reversed, with the Belgian Audi Club Team WRT leading HTP Motorsport by 17 points. Unless the Audi squad takes pole and wins the Qualifying Race – with the Mercedes team scoring nul points in that first race of the weekend – this duel for the cheque of 100.000 euro will go to the wire.

One competition that has already been decided is the Pitstop Challenge. With the crew of each car earning points by the speed by which they execute their pitstop, the crew of the #5 Phoenix Racing Audi now has an unassailable lead over the crew of the #0 BMW Sports Trophy Team Brazil BMW, which is in second the standings. For their performance the Phoenix Racing crew will be handed the Pitstop Challenge Cup at the Prize Giving Ceremony on November 28th in London.

Villorba Corse increases the pace in the Blancpain Sprint Series

Thoughts on the title at the Baku World Challenge