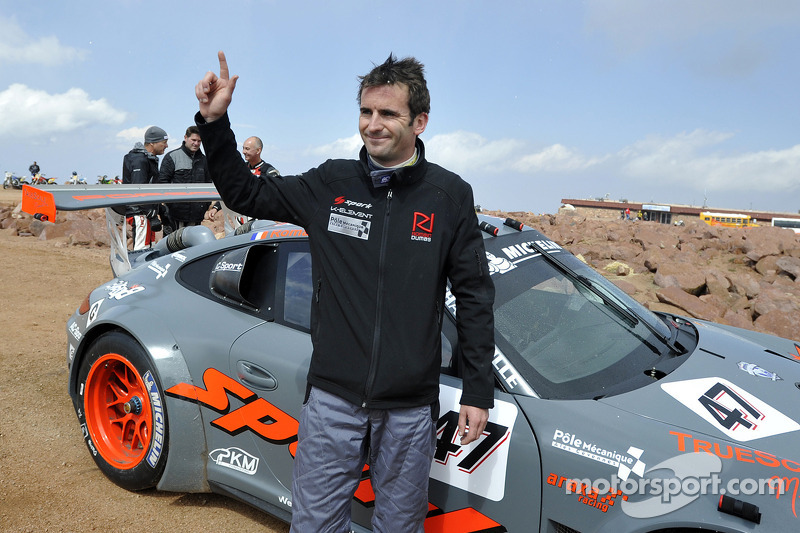 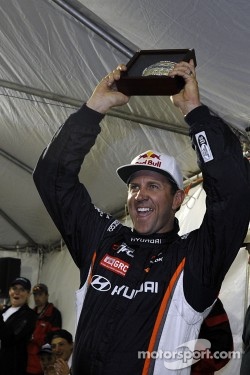 King of the Mountain Rhys Millen

Colorado Springs, August 15 - The 90th running of the Pikes Peak International Hill Climb had it all for thousands of fans and the drivers and racers who came to Colorado Springs for the race, delayed from its original date of July 8 by the horrific Waldo Canyon Fire.

The 37-day delay brought fans of the nation’s second-oldest motor sports race everything they ever dreamed of, and more.

It turned out to be the fastest of them all since it began in 1916.

83 automobiles and 87 motorcycles were on hand at the start of a sunny, cloudless sky at the Rocky Mountain Ford Start Line, but by the end of a very long day, the summit of Pikes Peak endured snow, hail, rain and wind, with race officials shortening the course by almost 3,000 feet for the last pair of divisions. By then, the temperature on top was just 38 degrees.

Two major crashes and a flurry of red flags delayed the program for more than two hours, but before those, the now fully-paved course was turning over records as fast as one could blink.

The first five motorcycle divisions produced course records, highlighted by the blistering 9:52.819 turned in by Ducati’s Carlin Dunne in the 1205cc field, the best ever on the mountain by a motorcycle. It wiped out the old record of 11:11.329 that Dunne established last year as a rookie.

He needed the record because Greg Tracy was right behind him on his own Multistrada and ripped off a 9:58.262. That’s the stuff of legends, two bikes under ten seconds right away!

The stunner of the day came in the loaded Electric auto division, and it was a shock.

Japan’s Nobuhiro Tajima, who had won the last six Unlimited titles and who was the defending King of the Mountain, roared off in search of another course record. But a fire in his engine forced him to the side early. He climbed out of his auto and walked back to the start line. 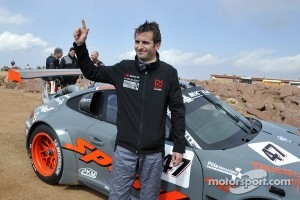 Romain Dumas after his run

But that only set the table for the drama that soon was to unfold.

French star Romain Dumas, winner of the 2010 24 Hours of Le Mans, had entered the Pikes Peak Open as a rookie, but a rookie with worlds of experience and a great endurance performer. Veteran observers during the week noted his fast practice times and nodded.

Buckled into his sleek Porsche GR3R, Dumas roared through his 156 turns and obliterated Tajima’s course record set last summer with a fire-and-ice clocking of 9:46.181 that reverberated up and down the mountain, and around the racing world on the internet. There he was, atop America’s Mountain, with the fastest time ever.

Now came Rhys Millen for the 18th time on the Peak, the son of famed Rod Millen and an eight-time champion who originally was entered in Unlimited, but switched to Time Attack in the spring.

Mixed in a tough field with defending champion Brianne Corn, veteran Dave Kern and others, Millen had a goal – to return the record held by his father until 2011 to the Millen family in his familiar Hyundai Genesis Coupe.

No mechanical issues this time, no squishy brakes, no misses at all for the polished Californian by way of New Zealand. 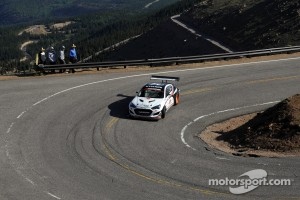 When he got the flag at 14,100-feet and unbuckled himself, people were running to him from the Summit House, and they were yelling “9:46.164!” Millen heard it and believed it, and his arms went to the sky.

The record was back in the Millen family by the narrowest of margins.

A total of eleven new records had been set by drivers and racers from 14 countries and the benefits of a fully-paved course were obvious, and so were the dangers and the speeds.