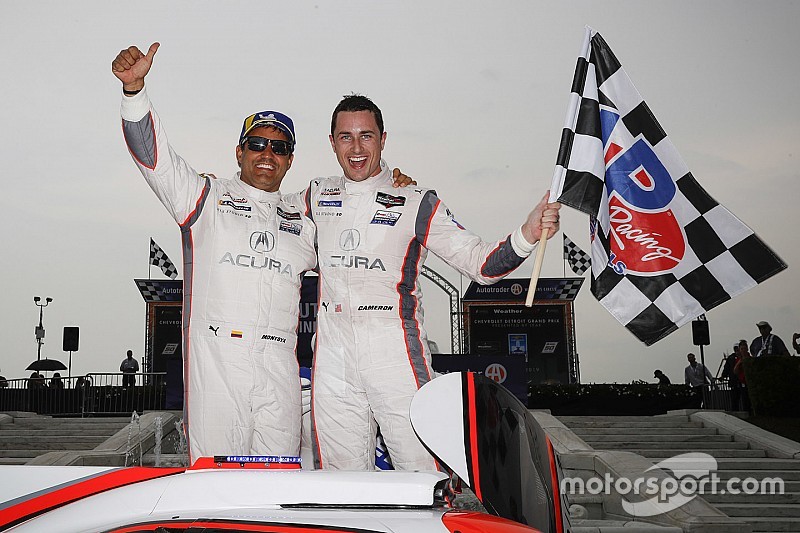 Acura’s Dane Cameron held off a charging Felipe Nasr in the closing laps of the Chevrolet Sports Car Classic in Detroit to clinch a second consecutive IMSA WeatherTech SportsCar Championship victory for himself and Juan Pablo Montoya.

At the start, Mazda Team Joest’s Jonathan Bomarito made a brilliant getaway to split the Penske ARX-05s as polesitter Montoya got the jump on teammate Helio Castroneves. That slowed the Brazilian enough to force him to concede third to Pipo Derani in the #31 Cadillac DPi-V.R of Action Express Racing.

In fifth lay Joao Barbosa in the second AXR Cadillac ahead of Renger van der Zande in the Wayne Taylor Racing Caddy. Next up was Simon Trummer of JDC Miller Motorsports ahead of the second Mazda of Tristan Nunez.

However a yellow was thrown immediately for a GTD wreck at Turn 1. The restart after five laps was uneventful other than Trummer muscling past van der Zande for sixth. Then round at Turn 11, the torque of his Cadillac helped Derani gun past Bomarito on the run to Turn 12 and immediately the AXR Cadillac closed onto the tail of Montoya’s Acura.

By Lap 16, the lead trio had closed up, and when Derani got held up by Richard Heistand’s Lexus on Lap 17, Bomarito dived to the inside and re-passed them both at Turn 11. Just a lap later, IMSA debutant Victor Franzoni tagged the tire wall with the tail of his Juncos Racing Cadillac hard enough to dislodge the tires and break up the left-side rear fender and rear wing.

When the second yellow flew to rebuild that tire wall, all but one of the Prototypes – Tristan Nunez in the #77 Mazda – pitted, and Ricky Taylor who took over the #7 Acura from Castroneves, beat teammate Cameron (who’d replaced Montoya) to the exit of pitlane, while the #31 Cadillac now piloted by Nasr squeezed out ahead of Harry Tincknell, who’d taken over the #55 Mazda.

However, the yellow flew again almost immediately for a GTD calamity. At the restart, Cameron put the #6 Acura back ahead of its sister car and then passed Nunez at Turn 11 on Lap 24, with little more than 50mins of the 100min race still to run.

Taylor, Nasr, Tincknell stopped on Lap 33, Nunez and Cameron were in next time by, but then the full-course caution flew for Jordan Taylor striking the Turn 7 tire wall in the WTR Cadillac and leaving a chunk of wing on track.

That left Cameron leading teammate Taylor for the restart ahead of Nasr, Tincknell, Stephen Simpson in the #84 JDC Miller Cadillac, Colin Braun in the CORE autosport Nissan, Jordan Taylor, Tristan Vautier in the second JDC car, Oliver Jarvis now in the #77 Mazda, and Filipe Albuquerque in the #5 AXR Caddy.

At the restart, Tincknell dived down the inside of Nasr for third at Turn 3, and Simpson took advantage to grab fourth place, but then the JDC driver tried to also get past the Mazda into Turn 4, and the pair collided, sending the Mazda heavily into the tire wall.

That left Simpson third ahead of Nasr, Braun and Jordan Taylor, Vautier and Jarvis in the sole remaining Mazda – which then spun on the restart after a collision with Albuquerque. Taylor also had to pit again for yet more side damage repair following a collision with Vautier.

The first couple of laps after that restart with less than 20mins to go saw Nasr get around Simpson for third, and then around Taylor’s Acura for second, to start homing in on leader Cameron. At this point the top two started trading fastest laps, the pair pulling well clear of Taylor, Simpson and Vautier.

In the final 10 minutes, Nasr started pressuring Cameron hard as they weaved through GTD traffic, but the Acura pulled away again – only to the tune of 1.3sec – when Nasr made a braking error at Turn 7 and ran long. With rain starting to spit on the track, Nasr’s teammate Albuquerque passed Braun in the CORE autosport-run Nissan DPi.

Cameron eventually crossed the line 0.82sec ahead of Nasr to score the second consecutive win for the #6 Acura Team Penske ARX-05, with Taylor 15sec down in third ahead of the two JDC Miller Cadillacs and the second AXR Cadillac.

Polesitter Zacharie Robichon sent the Park Place Motorsports Porsche into the lead at the start, chased by the two Meyer Shank Racing Acuras of Christina Nielsen and Trent Hindman, the AIM Vasser-Sullivan Lexus pair of Heistand and Frankie Montecalvo.

The Compass Racing McLaren 720S of Paul Holton was sixth, but the Paul Miller Racing Lamborghini Huracan of Ryan Hardwick was impaled by a wild effort at Turn 1 from Cooper MacNeil in the Scuderia Corsa Ferrari 488. That meant an immediate DNF for the WeatherTech car while the Lambo limped to the pits for repairs.

Everyone behaved on the restart and remained in the same order, but Holton was issued a drive-through penalty for lining up on the wrong side of the grid at the original start.

The round of pitstops that followed the Juncos Cadillac’s tire-clip saw Pat Long resume the lead for Park Place ahead of the Acura now being driven by Katherine Legge, with the two Lexuses – now driven by Jack Hawksworth and Townsend Bell.

But the second MSR Acura had a failed left-rear wheelgun, and at the restart its driver Mario Farnbacher thumped its tail hard into the wall, bringing out the yellow again.

On the restart, Hawskworth slipped up the inside of Legge to grab second and started pressing Long for the lead. At Turn 7, Hawksworth made the move and made it stick. When Legge tried also to pass the 911, Long drove her wide, which allowed Bell into third exiting Turn 8.

Right behind Legge was now Bill Auberlen in the Turner Motorsport BMW M6, which set GTD pole on Friday with Robby Foley but was penalized for a camber discrepancy and had to start from the back of the field.

The restart following Jordan Taylor’s debris-caused caution would see Hawksworth ahead of Long, Bell, Legge, Auberlen, Andy Lally in the Magnus Racing Lambo and Ryan Dalziel in the Starworks Motorsport Audi R8. Eighth was Bryan Sellers for whom PMR had made deft use of the yellows and got it back in the frame despite its Lap 1 disaster.

Again the order remained the same on the final restart, with Hawksworth well able to pull clear of Long who in turn remained out of reach of Bell who had Legge and Auberlen filling his mirrors.

However, with nine minutes to go, Legge was knocked into a spin by Auberlen at Turn 5 and she fell to 10th in class and IMSA felt no action need be taken.

Hawksworth hung on to beat Long by 0.83sec with Bell only 1.2sec further back in the second Lexus. Auberlen’s BMW stopped with two to go leaving fourth to Lally, ahead of Sellers and Dalziel.

This was not a GTD race that contributed to the championship, but instead a Sprint Cup event.