DeltaWing gets a new look for Rolex 24 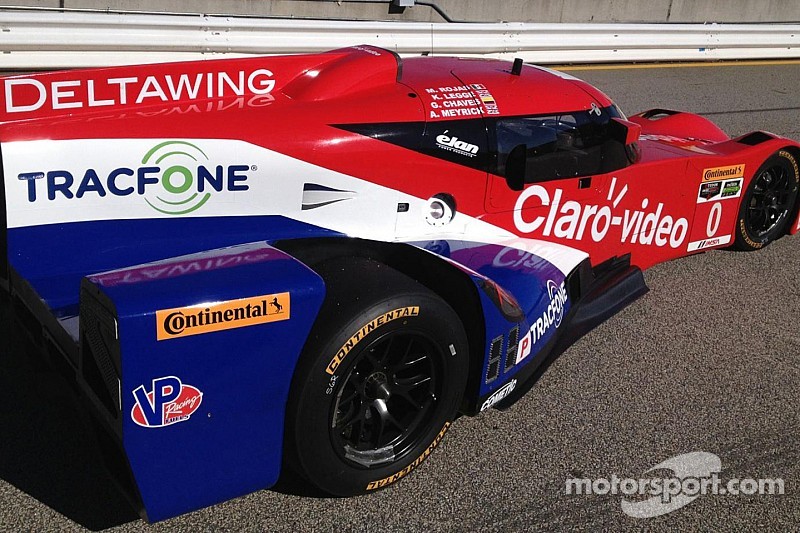 The silver DeltaWing coupe is showing off its new red, white, and blue look ahead of the 2015 season.

The Claro/TracFone DeltaWing Racing Cars team proved that the revolutionary DeltaWing coupe can be quick on the famed 3.56-mile speedway road course, but the real test comes this weekend, as the team looks to capture their first TUDOR United SportsCar victory in the Rolex 24 at Daytona.

The DeltaWing coupe paced among the leaders in last weekend’s “Roar Before the Rolex 24” test session, with a quick lap of 1:39.4 in the third practice that put them only three/tenths of a second off the leader’s pace. The team has put the hammer down this week, with shop hours dedicated to repairing damage from a Saturday afternoon incident at the Roar and to configuring promising new components. The team also rolls out an updated red, white and blue livery designed to showcase its new partners.

All four DeltaWing drivers will be on hand for the Rolex 24: Andy Meyrick, who has been with the team since early in 2013; Katherine Legge, who joined the team in May of that year and has been behind the wheel for nearly all the DeltaWing’s test sessions; 2014 Indy Lights Champion Gabby Chaves, who drove in the endurance events last season and the new addition to the team, three-time Rolex 24 winner Memo Rojas.

“There is so much preparation that goes into this race. You probably overtake more people in this race than you do all year. It’s a very rewarding race to win, especially after all the hard work. We have a very quick car and I expect that we can win this race. Obviously, it doesn’t depend 100 percent on us; lady luck and good work by the whole team are very important. There’s really good driver talent here and we have a car that can compete. We just need to stay out of trouble, which is the difficult part of this race.”

“It would mean everything to win this race, that’s why we do it. It’s the biggest race of the season. Everyone is working toward this race, it’s a big deal. We did well here last year, qualifying seventh, but this year we should have even more speed and, hopefully, more reliability. I think if we’re there at the end we’ll be in with a shot to win it. The car had good balance at The Roar so we know we have a good race car.”

"I am very pleased and honored to take part in this incredible event with such a great team, led by Don Panoz and Tim Keene. We have probably one the best driver lineups out there and our car is ready to be a real threat. I am excited and focused to do my best and have a great race. We have great speed at Daytona but because it’s such a long race, being consistent, managing traffic and staying out of trouble are as important as going fast.”

“Last year we came here with the DeltaWing never having being driven on the banking, so it was a new experience for us. The car was quick and we seemed to have the straight-line speed that we needed. The car also handled well in the infield sections, so it was a strong package; In short, the circuit really suits the car. And I really enjoy 24-hour races as I enjoy the challenge that we face not only as drivers, but also as an entire team. It’s ultimately like a whole season condensed into one race. The whole team has to deal with all the challenges, issues and opportunities that an endurance race throws at them, like the weather. Everybody thinks that in Florida the weather will be nice and hot and at this time of the year, but it can be very cold. The drop in temperature at night can be significant. The first objective is surviving but to win Daytona would be a dream. It is one of the biggest races in America and as a sports car driver, it’s high up on the list of races that you do want to win.”

“The team has worked very hard and we’re very encouraged by the progress we’ve made. I think we’ve given the drivers a good package. And we have a great driver lineup, with each one pushing the other – not just to be competitive, but also to do the right thing in the car. That’s part of my job, as well, to make sure that everyone knows the big picture. We’re not out there to win one lap; we’re out there to win a race. It’s about who runs the most laps, not about who does the quickest lap. No one is going to remember the pass you made at 3:00 am going into turn seven. There are going to be so many opportunities to make decisions and if you make a wrong one, you’ve just wasted an opportunity. The race is won by who finishes the most laps in 24 hours.”

“It’s an exciting time for the team right now, with Memo joining us and with our new partners, Claro Video and TracFone. The team has done a great job preparing the car for this race. The coupe did well in the test at Daytona last week, so we are looking forward to more of the same at the Rolex 24. This is a track that showcases the DeltaWing’s technology and efficiency quite well so if we can stay out of trouble, we can hope for a good result.”

Season starts for Audi at Daytona

Menezes one to 'watch' with RSR in Rolex 24 at Daytona