Los Angeles, Calif. - Renewing a partnership that produced two victories and was a force to be reckoned with in the 2013 American Le Mans Series, Duncan Ende will return to the wheel of the no. 9 Lino'spresso USA RSR Racing Oreca FLM09 in the 2014 TUDOR United Sports Car Championship with Bruno Junquiera.

Ende, a race winner in the Continental Tire Sports Car Challenge and the American Le Mans Series, is thrilled to be a part of the newly formed TUDOR Championship and to compete in the hotly-contested Prototype Challenge class. Ende and Junquiera won last year at Lime Rock and Road America, and finished second at Long Beach.

Supporting Ende this season will be Lino'spressoUSA, a line of gourmet Italian espresso capsules compatible with Nespresso® machines. Ende will also continue his relationship with non-profit STANDD, to spread the message of the dangers of driving while distracted. 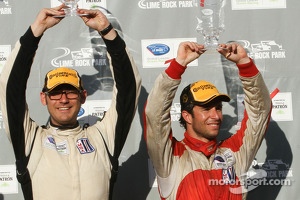 "It goes without saying that I am really happy we were able to continue with Bruno and RSR Racing in the new TUDOR United Sports Car Championship," said Ende. "What we thought was a one-off for Sebring last March ended up being a multi-race deal where we were in contention for a win at each race. Now, with the chemistry we have from the 2013 season, we are taking a run at the TUDOR Championship. I'm confident we have all of the elements we need to make it happen."

"It will be a really eye-opening experience to be in the first race of the new TUDOR Championship when we go green at Daytona in a couple of weeks," said Ende. "There has been so much speculation about how things would play with the rules, and obviously not everyone will be 100% happy, but from our perspective we were glad that the Prototype Challenge class carried over essentially unchanged. The field is so deep with talent and the racing so close, we'll be putting on a great show for the fans all season long."

The Rolex 24 at Daytona will be held on January 25-26 at Daytona International Speedway in Daytona Beach, Florida and will feature live coverage on FOX, FOX Sports 1, FOX Sports 2.

Marsal set for LMPC debut at Daytona with 8Star