January 25, 2013 (Daytona Beach, Fla.) – Strong performances by Ferrari teams in the GT-LeMans and GT-Daytona classes in the Rolex 24 at Daytona were overshadowed by a serious incident in the race’s third hour that involved Matteo Malucelli, driver of the no. 62 Risi Competizione Ferrari 458, and Memo Gidley, driver of the no. 99 GAINSCO/Bob Stallings Racing Corvette DP.

Following the incident, both drivers were transported to Halifax Medical Center, where Malucelli was awake, alert and communicating with hospital staff. He will remain at the hospital for further observation. 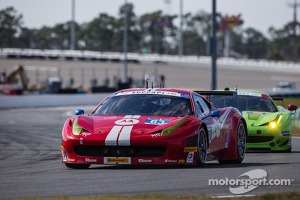 The incident, which happened during the third hour of the race, ended what had been a stirring drive for the Risi Competizione Ferrari. After starting at the back of the field, Gianmaria Bruni navigated the field of GT-D and GT-LM cars to challenge for the lead of the GT-LM class.

After nine hours, multiple teams remain in contention for a class victory in GT-Daytona. The no. 63 Scuderia Corsa car has continued to challenge for the class leader position, while no. 555 Level 5 Motorsports remains solidly on the pace with the lead lap.

It is very busy on the track but we are running to a strategy and the Ferrari is feeling very strong. We led for a little while but it is a long race so we are just trying to save the car, stay on the lead lap, and stay out of trouble. Dealing with the traffic is pretty difficult but we have a good enough car that we can deal with it without losing too much time.

Our car is as good as it's ever been the past whole week, so I'm really quite encouraged about how we could possibly do. We had a bit of a miscommunication and got a penalty but it's a long race and we'll get the lap back for sure.

The car is fantastic. We know we have a strong car. We showed up with a really strong setup and tuned on it a little bit in practice and made it even better. It's really fast, very consistent. The only issue we've had so far was during the red flag we were really critical on fuel so we had to pit out of sequence which shuffled us back, but we got it back before too long and I think I came in leading the race so things are good right now. We have a long way to go.

Krohn Racing after 6-hours of Rolex 24 at Daytona