Daytona Beach, Fla. (26 January 2014) – There was no shortage of effort, but the effort fell short of expectations for Michael Shank Racing with Curb/Agajanian as the team completed 599 laps of the Daytona International Speedway in the 52nd running of the Rolex 24 At Daytona this weekend. 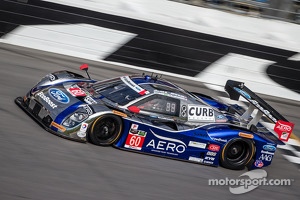 Drivers John Pew, Ozz Negri, Justin Wilson and AJ Allmendinger were hoping to match their 2012 result in the race with an encore victory as the new IMSA TUDOR United SportsCar Championship opened this weekend. But after a mechanical setback during the overnight hours, the Michael Shank Racing #nevergiveup attitude was put into play as the team delivered the Ford EcoBoost its first-ever finish in the world-class endurance event.

Following Saturday’s 2:11 PM green flag, the team ran in the top-five and led the race until early Sunday morning when a transmission issue forced the team behind the wall for repairs. Working quickly, the mammoth task was completed by the team in less than three hours. Returning to the fray some 50 laps down to the leader, the No. 60 Michael Shank Racing with Curb/Agajanian Ford EcoBoost Riley finished the race 12th in class after a long hard day at the races.

"It was a tough road, combining these two series,” said Shank of the merger. “And it was a lot of effort from Ford and Roush Yates to have this EcoBoost motor ready for the race. We’ve had no issues with it. But we did lose first gear earlier this morning. We were able to replace the (gear) stack and get back out there but there ended up being residual debris in there and we had to bring the car in to replace the box before it blew up.

We could have parked it but we wanted to do the job and finish strong—we had to for all the people in Detroit who are behind this. They put in so much effort and we want to finish as well as we can for all our partners. We wish we were there to be fighting for the win like we have the last couple of years, but we just want to get to the finish as best we can.”

The team will look to build some momentum in the IMSA TUDOR SportsCar Championship when round two is held at Sebring International Raceway March 12-15.


John Pew: “The Shank guys really never give up. This race, it’s huge. We really wanted to bring a big result for Ford and the EcoBoost but with the transmission problem we were not fighting for a podium. But it was good to at least get to the finish and considering everything that was new for everyone, that is something to build on. You always want to be fighting for more but now we will just look ahead to Sebring, that’s going to be an outstanding event.”

Ozz Negri: “The car was great and the result does not represent the finish we could have had. Nevertheless, my hat's off to Mike and the entire crew for working so hard and taking us all the way to the end. Hat's off also to Ford; they worked so hard on the engine during such an important period of time. I can only tell you that I am looking forward to the rest of the season!”

Justin Wilson: “After some of those yellows, they were able to clean up the debris that was all over the track overnight. We just got so far down, there wasn't any way for us to come back so we were just doing laps. The Ford EcoBoost engine ran flawlessly throughout this race, for its first time out, they did a great job. It just wasn't our year.”

AJ Allmendinger: “These Michael Shank Racing guys work so hard but this was just not our year. I had a couple of weird shifts and it seemed like it was (transmission) working okay but then they called me in before the transmission was going to blow up. So we had to go behind the wall. The guys hustled and got it done. The Ford guys put a lot of work into this engine to be ready and the car was pretty easy to drive. We didn’t have the same pace as the leaders but the car was strong. It’s disappointing to not be fighting for something big here at Daytona but just a freak thing with the transmission.”

Mike Shank: “When we've come here for the past four years, we've finished on the lead lap between first and seventh so when we're not in that position, it's a bit of a letdown. But it's not for lack of trying, I promise you that. It's just a fluke gear thing that we've never had happen ever, that led to a bigger gearbox problem. The motor ran great actually. We didn't know where we stood with the motor totally but it did great. It's a true testament to Ford. It was a monumental effort to get a new engine to last (for the full distance).”