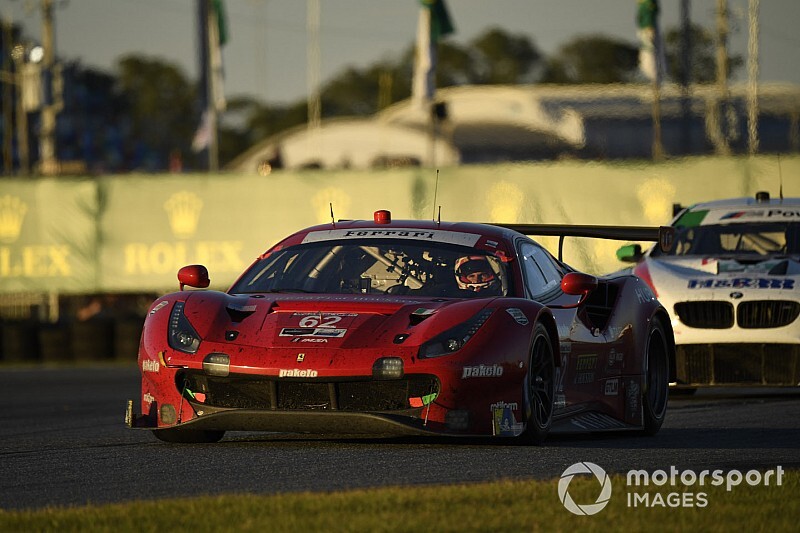 The straightline performance of the Risi Competizione Ferrari 488 GTE in the Rolex 24 at Daytona was so poor that it was a struggle to pass GT Daytona traffic, claims Davide Rigon.

Up against two-car factory teams from Corvette, Porsche and BMW in the GT Le Mans division, the Risi Ferrari shared by Rigon, James Calado, Alessandro Pier Guidi and Daniel Serra struggled for pace throughout the race, albeit kept on the lead lap by caution periods.

However, Calado was already over 30 seconds adrift of the class lead when he suffered a puncture on the banking in the penultimate hour that meant the Ferrari failed to finish.

It followed a pre-race BoP adjustment that robbed Ferrari of 4kW of power - about 5.4bhp - and mandated a steeper rear wing angle, made after Calado topped GTLM qualifying for Risi during the Roar Before the 24 test at the start of the month.

“I’ve never seen such a bad BoP for us,” said Rigon. “We were struggling to outperform the GTD class cars for speed."

Serra added: “We did our best even though I think it was clear to everyone that we didn't have the speed on the straight that our rivals displayed. The team did everything in its power, and we drivers also have little reason to blame ourselves."

Calado described the puncture that ended Risi's race as a "hairy moment", while race engineer Rick Mayer admitted that the team's position meant trying to fix the 488 for a return to the track in the final part of the race wasn't deemed worthwhile.

“Unfortunately, it was a bad ending to a bad day," said Mayer. "We ended up with a right rear tire puncture that brought us into the pits that stopped us from finishing.

"The damage wasn’t easily repairable and there was some risk of not being able to find all the damage to continue. The result wasn’t going to be heroic, so the risk reward wasn’t there for us to fix it and continue.

“Unfortunately, we weren’t competitive here, so it was a race for attrition for us; that’s not a fun way to race for 24 hours, but we’ll regroup and hopefully we’ll come back and have a more competitive rules package for Sebring.”

Despite Mayer hinting at a return to Sebring, a Risi statement pointed out the Houston-based team has "not yet announced any additional racing plans for 2020".

The team skipped the Florida event last year, participating only in the Rolex 24, the Le Mans 24 Hours and Petit Le Mans, which it won with Calado, Pier Guidi and Serra.