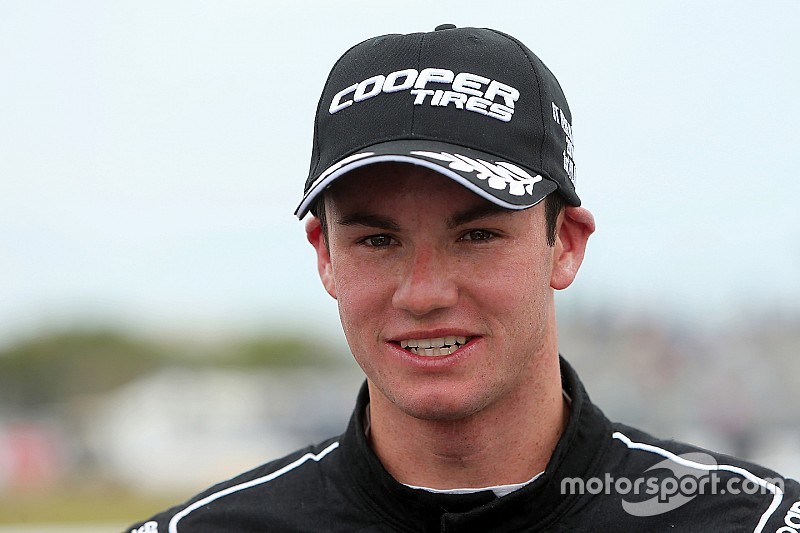 Parker Thompson of Exclusive Autosport team extended his championship lead with victory on the 0.686-mile Lucas Oil Raceway, and as in qualifying, his only threat came from the Juncos Racing machine of Carlos Cunha. The Brazilian youngster closed up under traffic in the closing stages to finish just 0.22sec adrift.

Cunha’s Juncos teammates Robert Megennis and Rinus VeeKay finished third and fourth, but need not have had it so easy. However, unfortunately the third-placed starter David Malukas (BN Racing) and sixth-placed starter Harrison Scott (RP Motorsports) tangled while dueling over third place, with the pair of them crashing into the wall at Turn 4.

Inevitably, out came the caution flags, but Thompson was flawless, and Cunha only gained ground when they hit traffic.  However, the Canadian kept it all in control to win by a couple of tenths, the pair of them some nine seconds clear of the Megennis vs VeeKay battle, with Sting Ray Robb fifth for Team Pelfrey, last of the unlapped runners.

From pole, Kirkwood immediately pulled away from Rasmus Lindh’s Pabst Racing machine, but all eyes were on Alex Baron who only qualified eighth but drove his Swan-RJB car around five cars in Turns 3 and 4 to move into third, although that would be as far as he got. On Lap 29, while trailing second-placed Lindh by 1.5sec, Baron collided with a backmarker in Turn 3 and struck the wall.

Out came the caution flags, and by now Kaylen Frederick had gotten around one of his Pabst teammates, Lucas Kohl, for fourth and now had a clear shot at Lindh for the Lap 40 restart. Frederick’s attempts to pass the Swedish rookie were put on hold by another yellow just a lap later as

And while the Lap 50 restart saw leader Kirkwood again able to ease away Frederick got around Lindh through Turns 1 and 2 and seal runner-up spot. restart by Frederick saw him sweep past Lindh into second place in Turns 1 and 2. They would pass the checkered flag 0.7sec apart, and 1.3sec behind Kirkwood.