Back to the future for IndyCar's new competition and operations director

Derrick Walker commented in the press conference held at Indianapolis Motor Speedway yesterday that he has “… been around enough to see the good, the bad, and the ugly”.

The first thing Derrick Walker, IndyCar's new President of competition and operations, needs to do is extend the month of May.

Yes, Mr. Walker needs to advocate for an end to the two-week sprint that prep for the Indianapolis 500 has become, and go back to the future with a month-long spring marathon fans and teams and manufacturers alike can enjoy.

It just makes sense, with a healthy IndyCar series finally gaining fan momentum, a new car still being refined in its second year of manufacture, and a bevy of media-savvy young stars who need television exposure, to return the pre-race schedule of practice and qualifying and bumping to its historic timeline over two weekends.

Walker acknowledged the new, more vigorous pulse of IndyCar by saying, "Competition in the series right now arguably couldn't be better; but, we've got to continue to strive to be better in every way, including our decision-making, our planning, our safety concerns and how we address those." 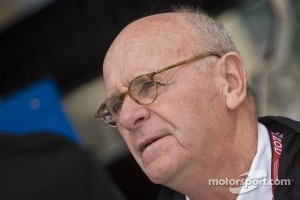 That sounds like the kind of vision necessary to put cars and drivers and manufacturers onto the world's greatest automotive test track for an extended period of time, as was the case prior to the current truncated Indy 500 timeline.

Consider this: with the arduous travel to Brazil immediately ahead of the 500 almost every mechanic and team would revel in a month-long stay at home. And fans who love this sport would again have an opportunity to get to the track on one of those wonderful uncrowded practice days when the drivers are relaxed, cordial and willing to chat. And manufacturers earn a chance to open up their goody bag of speed parts and programs for high-speed testing in real-world use.

In his opening remarks at Tuesday's press conference to announce the appointment, Walker reflected on IndyCar and "what it represented and what over the years had happened to it."

"I've been around enough to see the good, the bad, and the ugly," he said. "IndyCar deserves vision and leadership equal to the quality of our teams."

Amen to that, Mr. Walker.

Walker's intent is to foster competition, by whatever means necessary, be that more engine manufacturers, chassis partners, aero-dynamists or specialized manufacturers of safety and electronic car management tools.

"My personal opinion is that IndyCar is about competition. That's the history of IndyCar, and the sooner we can get more guys in battling it out there, the sooner the fans are going to be interested in what we're doing. The fans come, the companies come, and everybody hopefully enjoys what we do and makes money doing it."

The Indianapolis 500 has always had a reputation of bringing innovative applications to motoring, from the first rear-view mirror to today's state-of-the-art micro-tubule radiators and black boxes. Innovation, of course, costs money. One of the biggest challenges Walker will face is the less-is-more mindset prevalent in some corners of a sport that is and always will be about excess.

"Our goal is to foster invention just enough to allow our sport to grow and improve and innovate, yet keep costs at a manageable level not only for the teams but the manufacturers, suppliers and fans that are integral to business."

Those all sound like sound arguments for more development opportunities at Indianapolis Motor Speedway. Now give us the time at racing's greatest venue in the city known as the capitol of motorsports necessary to grow those resources in both equipment and people. Now give us a month-long ride, an E-ticket of access to all this activity, which builds momentum to a climax on Memorial Day.

Should Formula One return to Long Beach?