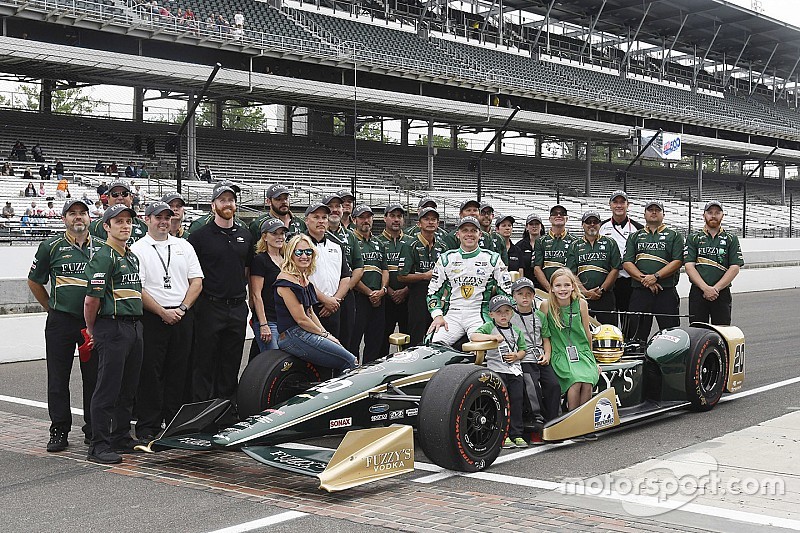 Ed Carpenter has admitted that even before he started the final run of the Fast Nine shootout during Indy 500 qualifying, he suspected that Scott Dixon’s extraordinary four-lap average had pushed pole position out of reach.

The Chip Ganassi Racing-Honda made three 232mph laps followed by a 231.9, giving him a four-lap average of 232.164 – the fastest since Arie Luyendyk’s qualifying run 21 years ago.

Carpenter’s opening lap was also a 232, but the next two were 231s and his fourth was a 230.9. Nonetheless, it was enough to produce second fastest and top Chevrolet runner. Meanwhile his Ed Carpenter Racing-Chevy teammate JR Hildebrand clocked sixth fastest.

Said Carpenter: “When [Dixon] did that 232 and I was in the car, it actually kinda made some of the pressure go away because I was like, ‘Well, I'll be way more shocked than I was yesterday if we run that fast for that many laps.’

“So at that point, obviously I wanted to be on the front row and was going to go give it everything I had, and I think we accomplished that. I don't know that we could have gotten much more out of it today in those conditions.

Carpenter, who grabbed Indy 500 pole in both 2013 and ’14 said: “We won poles before, but it's great to be on the front row. Really excited that the weather looks good tomorrow and we can continue making our car better for next Sunday.”

He continued: “Not sure where Scott's speed came from totally, but we knew it was going to be quicker today. The way the wind was blowing made for quicker times. The backside of the track is way more exposed than the front, so you get a tailwind down the back and then the front stretch is sheltered. The wind, I think, was a big part in the speeds being faster today.

“It's cool to see the speeds going back up, to hear the crowd roar when Scott did those laps, when everyone put up big times. It's cool. Part of the mystique of this place is pushing the limits of the cars and us as drivers. So I enjoy that part of it. It's thrilling when it goes well and when it goes poorly like we saw yesterday, that's part of what makes IndyCar special.

Carpenter was unwilling to discuss the potential Honda advantage over Chevrolet at Indy, but said: “The level of competition in this series from teams, drivers, engine manufacturers… it's cut-throat, and you've got to be on it all the time. We're right there, so it's not for a lack of trying, it's not for a lack of speed we're on the front row.

“You're not going to hear me complaining, we're just going to keep getting ready to put the best 500 miles out there we can.”

Alonso says overboost may have cost him front row slot