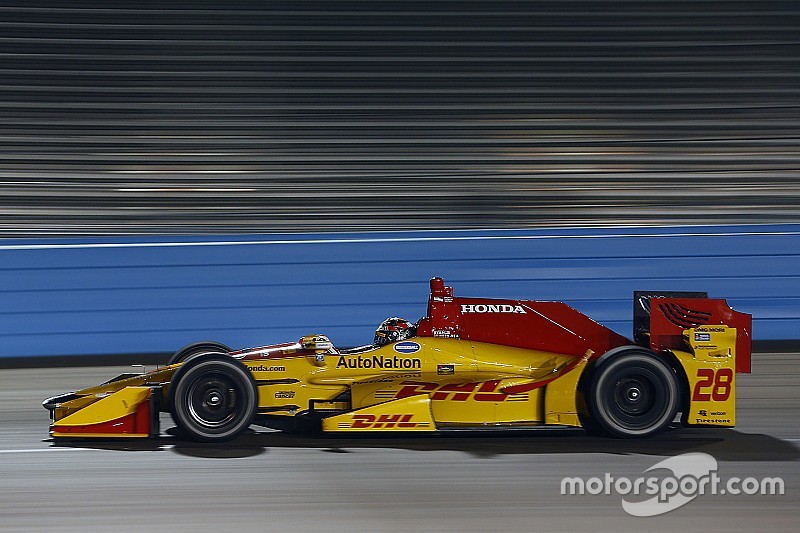 Graham Rahal, Takuma Sato and JR Hildebrand all found the wall in the final session of IndyCar’s open test at Phoenix International Raceway, but through it all Ryan Hunter-Reay came out top.

Rahal had a relatively minor skirmish with the SAFER barrier on the exit of Turn 1 early in the 6-9pm session at Phoenix, but then Sato backed his car in hard exiting Turn 2 , in a shunt similar to that which befell Andretti Autosport teammate Alexander Rossi this morning.

There was then a dispute over territory when Team Penske-Chevrolet’s newest recruit, Josef Newgarden, made a low-percentage late divebomb on Sebastien Bourdais’s Dale Coyne Racing-Honda at Turn 1. Despite kicking up dust down on the apron trying to avoid what he’d started, Newgarden still rubbed wheels with a surprised Bourdais, sending the DCR car up into the gray, barely an inch from the outer wall.

Once the session restarted with 20 minutes to go, a lot of cars hit the track, and one hit the wall. That was JR Hildebrand’s Ed Carpenter Racing-Chevrolet, which lost his right front end fence on the rear of Will Power's Penske, which sent the ECR car into the wall at Turns 3 and 4, before making sharp final contact with the inner wall at Turn 4. It was a disappointing end to the day for the team and driver that had (unofficially) ducked well below the Phoenix lap record in the afternoon session.

On the plus side for Andretti Autosport-Honda, Hunter-Reay, Marco Andretti and the fallen Takuma Sato finished the session 1-3-5, the 2012 champion and 2014 Indy 500 winner clocking a 189.716mph lap to go top. That put him 0.12mph faster than Bourdais’ impressive effort for DCR, with Andretti a further 0.4mph behind.

Fourth was the most impressive effort turned in by a Chip Ganassi Racing-Honda over these two days, Max Chilton claiming that honor ahead of Sato.

The fastest Chevrolets were also a surprise – Carlos Munoz and Conor Daly in the AJ Foyt Racing cars, ahead of Penske's Helio Castroneves and Newgarden, and the ECR duo of Carpenter and Hildebrand.

However, given that the teams were only granted six sets of tires for two days of testing, they devoted most of this evening session to running their cars in traffic on worn rubber. Hunter-Reay’s time was at least partly legacy of him having fresher tires, because he completed just 20 laps in the afternoon session, as a setup direction taken by the #28 team didn’t work.