NASCAR usually doles out its penalties two days after a race, but INDYCAR needed to wait until everyone was ensconced in Texas for this weekend’s Firestone 550 race before they finally closed the book – make that slammed the book – on the Duals in Detroit.

We all knew that Sebastian Saavedra was going to get a wrist-slap for his double birds (not directed at Race Control) during the first Dual when he was taken out of the running and caused the third and final caution of that contest, won by Mike Conway. Saavedra was fined $30,000 for his on-camera indiscretion but can work it off by making public appearances on behalf of INDYCAR to the season’s end. 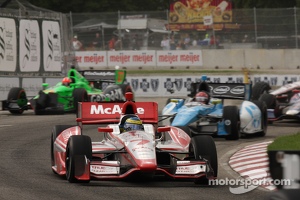 The Colombian wasn’t the only one hit with fines and penalties: the No. 16 Rahal Letterman Lanigan Dallara/Honda/Firestone entry, driven by Race No. 2 runner-up James Jakes was fined $10,000 for a pair of post-Race 1 qualifying infractions. Jakesy’s rear wing mainplane was not set at the decreed 0.0 degrees (or minus 0.5 degrees, and the mainplane trailing edge height wasn’t at the appointed 28.060 inches (plus or minus 0.050 inches).

Apparently, INDYCAR is cracking down on glove-throwing and mouthing off as well, as both Will Power and Sebastien Bourdais have been placed on probation for their Race No. 2 actions. Power didn’t like Bourdais’ actions in causing a 10-car pileup in the race and threw his gloves at the Frenchman, who made some wise ass remark to INDYCAR officials after the race. For this, the duo are on probation until the end of the year. Bourdais finished 11th; after repairs to his car Power was the final finisher in 20th.

Now, I understand Jakesy’s fine for not having the car set up to the rules and I knew Saavedra was going to get a fine for his dole birds, but I’m really having a problem with the Power and Bourdais probations.

If the IZOD IndyCar Series wants bland puppets driving these cars, or if they want to see no passion displayed in what is essentially a passionate sport, they’re more than welcome to request that their drivers refrain from showing any emotion. But I don’t think that’s what anyone else wants. 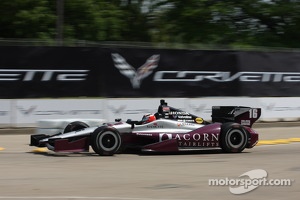 We like these drivers because they race hard and because they have individual personalities. When they’re happy, they exult (see Simon Pagenaud, Dual No. 2 in Detroit); when they’re not happy with their comrades, of course they let them know. Glove throwing is benign, INDYCAR officials.

While I'm not privy to Bourdais’ comments to an official after the race, please remember he had just gotten out of his car after 70 laps of hard racing and might have been provoked. Not something I know, but similar situations have occurred.

The INDYCAR drivers I know have fabulous personalities outside their cars and are all business when they’re on the job. That’s the way I like it – and that’s the way the fans like and expect their drivers to perform. In my opinion, the officials have overreacted in this case.