Miles: “Too early to tell” if IndyCar can return to Iowa

Penske Entertainment president and CEO Mark Miles says that IndyCar is investigating a possible return to Iowa Speedway as soon as 2022, but has other details to confirm before announcing next year’s schedule.

Iowa Speedway’s 0.894-mile oval was one of the most popular stops on the IndyCar calendar for teams and drivers, and its absence from the 2021 schedule left the series with just four oval rounds – two of which were back-to-back races at Texas Motor Speedway.

Series owner Roger Penske has twice told the media this year that getting more ovals on the IndyCar calendar is important because he regards track diversity as one of the series’ unique selling points. He said he doesn’t want IndyCar to evolve in a way that it comes to be regarded as “sportscars without fenders”.

Getting Iowa Speedway back on the schedule has therefore become one of Penske Entertainment’s priorities. There are hopes that Iowa-based Hy-Vee Inc., one of Rahal Letterman Lanigan’s sponsors, could help back the event [see Bobby Rahal’s comments below]. But Mark Miles says it would be premature to expect Iowa’s return as soon as 2022.

“It’s too early to tell,” he told Motorsport.com. “We’re always going to be on the lookout for oval opportunities, whether that’s a superspeedway or a short oval. It’s part of our brand, part of our heritage.

“Iowa always provided exciting racing, it’s an interesting prospect but not something we could announce today.”

Miles said that the quandary over Iowa was not the last piece of the puzzle to be completed before Penske Entertainment could reveal the 2022 NTT IndyCar Series schedule.

“There are a few additional sanctioning agreements to be extended,” he said, “so that’s not about new venues but just checking the details on the ones we currently have.

“And there’s still a little bit of work to do with NBC about exactly which events will be on network, which will be on cable, which will be on Peacock [NBC’s live streaming service]. But the music will stop pretty soon and we’ll be able to announce the full details.”

Miles said there were no big surprises to come, and also that this year’s gap in the schedule, to accommodate NBC’s coverage of the Tokyo Olympics, would be closed up.

“Roger [Penske] was right – let’s focus on North America, our home market, and if something else comes along, then fine, let’s look at it,” he said. “And he’s also a strong believer in date equity, so we won’t go past September next year, and the season will start in March – maybe a little earlier maybe a little later – than usual.

“And then in the summer, we’ll close up the gap that we had this year as a result of Toronto getting canceled and NBC focusing on Tokyo. It’s not like we’ll have a race every weekend, but there won’t be that big four-week break we had this year.”

He also all-but-confirmed that WeatherTech Raceway Laguna Seca would return to the season finale spot in 2022, as per 2019. Due to the effects of COVID-19 restrictions, the event was canned altogether last year, while this season – for the same reasons –  the Grand Prix of Long Beach was postponed and shifted from its traditional April date to the end of the season, completing a west coast swing of three straight races – Portland, OR., Laguna Seca, CA., and Long Beach, CA.

But for 2022, Laguna Seca will host the (likely) championship decider once more, something that the race organizers sought when it returned to the IndyCar schedule three years ago.

“Yeah, Laguna Seca as the finale is no longer an obligation – that was a one-year agreement for ’19,” said Miles. “But they love the idea, we love the idea, it’s desirable, and our sponsors want a great event to end the championship to which they can invite their clients and customers. It’s hard to imagine a better place to do that than Monterey.” 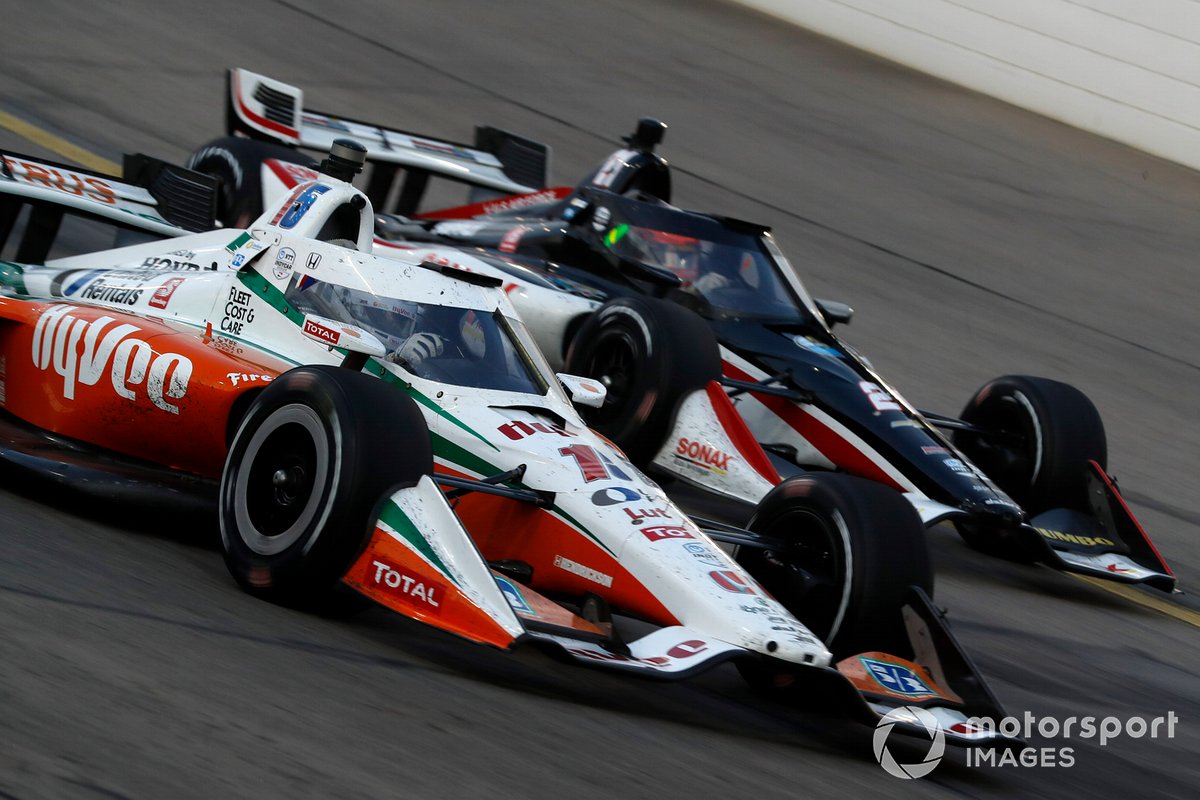 Graham Rahal's RLL-Honda on its way to third at Iowa Speedway last year.

Three-time Indy car champion and 1986 Indy 500 winner Bobby Rahal first raced at this level in 1982 and became a team owner in ’92, so has vast experience of witnessing promise fulfilled, faltering or failing. So like Miles, he takes the same canny “nothing’s done until it’s done” attitude toward the possibility of Iowa’s return.

But inextricably intertwined with his business acumen and wisdom of experience is a deep passion for the U.S. open-wheel scene and, like Penske and Miles, he believes a strong oval element on the IndyCar schedule is imperative.

“Just about every driver I’ve spoken to likes Iowa Speedway and thinks it’s a shame it came off the calendar this year,” he said. “It’s a bullring, the racing’s good, and it’s very demanding for the drivers and engineers to get it right.

“So I hope we go back there. A lot of people want to see more ovals and to me the short ovals were always the best ovals, whether that’s Milwaukee – which I still think was the best – or Phoenix before they ruined it for IndyCars, or Nazareth which was brutal! The one-mile ovals are great places for IndyCars.

“I can’t speak on Roger’s behalf, nor on Hy-Vee’s but I do know that Hy-Vee is a proud Iowa company, and I think both parties are having discussions, although I don’t know how far those have reached. I’m not at those discussions but I’ve got my fingers firmly crossed.”

Rahal agrees that impressions from the outside – that Hy-Vee Inc. is growing increasingly enthusiastic about IndyCar – are accurate.

“Yeah, we were introduced to them in 2020 at Iowa, and Graham had a good race there [finished third] which persuaded them to do the Indy 500 [Spencer Pigot’s third RLL car] and now they’ve been on our #45 car at several races this year. I think they feel they are certainly getting the value they’re looking for, there’s a lot of enthusiasm there.

“We’re not yet close to a full season with them, but there is excitement within the company, because they promote the hell out of their involvement with us, with IndyCar, in all their grocery stores, their convenience stores across the Midwest. They could give a lesson to a lot of other sponsors about how to take advantage of their commitment and investment by imaginative promotion. They create value for themselves and by doing that, they generate value for – and interest in – the IndyCar Series.”

So Hy-Vee would be the ideal backer – or leading company in a conglomerate of backers – of an IndyCar return to Iowa Speedway?

“Oh yeah, absolutely. They just get it.”