Juan Pablo Montoya had on this weekend at Texas Motor Speedway his best Indy car finish since Oct. 10, 2000.

Juan Pablo Montoya breezed into the media center after 248 grueling laps on a sweltering evening seemingly without a concern.

His broad smile and rapport during the lively Q&A summed up the third-place performance June 7 in the Firestone 600 at Texas Motor Speedway and his current station in motorsports.

"I'm happy," said Montoya, who at 38 years old returned this year to Indy car racing after a 13-year absence. "I had a hell of a race."

Montoya, who led 13 laps, flirted with the thought of firing the six-shooters in Victory Circle following a Lap 246 restart. The No. 2 Verizon Team Penske car was caught, however, by Will Power in the final few hundred yards and he finished .5571 of a second behind winner Ed Carpenter and a nose short of his Team Penske teammate. 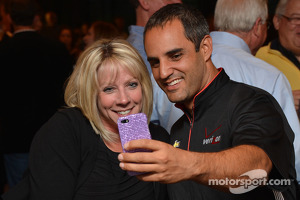 "It would have been nice to come out of here with a victory because I think we had a car that could have done that, but it was a lot of fun and I think a win is just around the corner," said Montoya, who started a season-high fourth.

It was Montoya's first Verizon IndyCar Series podium and his best Indy car finish since Oct. 10, 2000, at Houston, when he was runner-up to Jimmy Vasser. In open-wheel racing overall, runner-up in the 2006 Formula One Grand Prix of Monaco was his most recent best finish.

"I'm getting better every race," said Montoya, who recorded his third top-five finish in eight races. "It was fun. What a handful. To be good here it's got to be a handful.

"Everybody on Team Penske did an amazing job. We had a flat tire right at the beginning and drove through the whole field so that was fun. I felt that one of the cooler things about it was if you looked after the tires you had a massive benefit at the end of the run. You could really control the race and the pace and the benefit of it, and you could run high, you could run low."

It also was his best finish in 18 starts in all series at Texas Motor Speedway, where he led laps for the first time since the spring NASCAR Cup race (two laps) in 2011.

Montoya will test at two ovals this week with Team Penske car before joining its NASCAR counterpart at Michigan International Speedway for the June 15 race. He'll also compete at the Indianapolis Motor Speedway on July 27.

Invariably, the 1999 CART champion and seven-year NASCAR competitor is asked to compare the current Verizon IndyCar Series and stock cars. There's limited data that can be derived so far - the 2.5-mile Indianapolis Motor Speedway and the 24-degree-banked Texas Motor Speedway - but he made some generalizations.

"It's completely different," he said matter of factly about the 1.455-mile speedway. "Comparatively, the speeds in Cup cars were slow enough that you could go high up the track, almost right up to the wall. In the Indy car, if you don't remain down in the racing groove you're going to be in trouble. NASCAR is back off the entry, back off the entry. (In an Indy car) it's hard because you've got to drive it so hard. You're 40 car lengths behind somebody and you already start feeling the effect of the car in front, so you've really got to find ways to pass them.

"I'll tell you the truth, I haven't had this much fun in a long time."