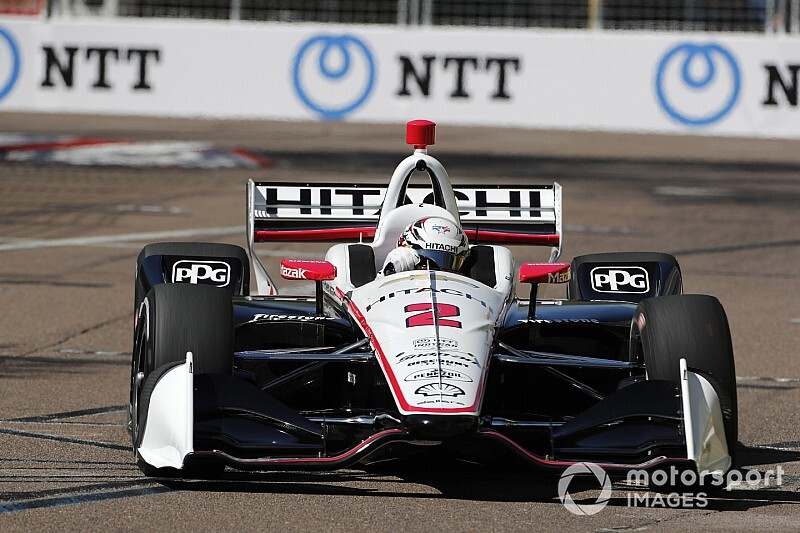 Poleman Power made a break and left Penske teammate Newgarden behind, as Felix Rosenqvist snatched second down the inside at Turn 1.

The rookie in the Chip Ganassi Racing-Honda was then chased by Newgarden and the second Ganassi car of Dixon, as Rossi got ahead of Ryan Hunter-Reay when RHR nudged into Rosenqvist at Turn 1.

Rosenqvist kept the pressure on Power in the opening laps, running around 0.7sec behind, while Newgarden ran 1.5sec further back leading the train of Dixon, Rossi and Hunter-Reay.

Then came a rash of stops to get off the Firestone alternate compounds onto the primaries. Arrow SPM pitted rookie Marcus Ericsson from 21st on Lap 6; five laps later, RLLR did the same for Takuma Sato and Dale Coyne Racing for Santino Ferrucci, and Matheus Leist and Max Chilton had the same service performed by AJ Foyt Racing and Carlin respectively.

The following lap, Marco Andretti and two-time St. Pete winner Sebastien Bourdais got serviced. However, the DCR-Honda’s engine appeared to blow and his race was over.

Graham Rahal was the first of the front runners to get off the reds and onto the blacks, but when Bourdais’ engine blew, Roger Penske called in Power, anticipating a full-course caution.

In fact, Bourdais was pulled well out of harm’s way in the runoff area of Turn 10. So Rosenqvist took the lead in his first ever IndyCar race, although he only went one more lap before he was brought into the pits.

Newgarden and Dixon stopped on Lap 17, handing the lead to Rossi. Newgarden emerged from the pits ahead of Rosenqvist and blocked the inside into Turn 4, but the Swede took advantage of his warmer tires to drive around the Penske driver and retain his place behind Power.

That became second place when Rossi and Hunter-Reay pitted on Lap 19, and Power resumed the lead.

Then the full-course caution flew for a second Honda blow-up, this time for Hunter-Reay down the front straight. He stayed to the inside in case the Andretti Autosport machine was dropping oil, but it would make outbraking maneuvers down the inside of Turn 1 a potentially even more hazardous experience than usual.

The green flag flew again on Lap 23 and Rosenqvist was in prime position to snatch the lead from Power down the inside into Turn 1 despite locking his inside front tire. Next time by, Power came off the final turn slow due to an overboost penalty and was threatened by Newgarden into Turn 1, but the 2014 series champion held off the ’17 champ.

On Lap 26, the full-course caution flew again. Ed Jones clipped the inside wall at Turn 9 which spat his Ed Carpenter Racing-Chevy hard into the outside wall, and his stricken car was clipped by Leist, cocking the Foyt car’s rear wheel up and ending its race against concrete, too. Andretti and Rahal pitted again during this second yellow-flag period after getting a puncture.

The race went green again on Lap 34, and Rosenqvist easily held off Power although Dixon had a look down the inside of Newgarden which in fact cost him time to an eager Rossi.

Behind them, Harvey was working hard to hold off his combative semi-teammate Hinchcliffe. Further back Colton Herta’s Harding Steinbrenner Racing-Honda wrested 11th from Andretti Autosport’s Zach Veach although he’d make his second stop on Lap 43. Kimball pitting his Carlin car from eighth allowed Simon Pagenaud to pull onto the tail of the Harvey vs Hinchcliffe battle.

Hinchcliffe ended his attempts to pass Harvey when he pitted for a second time on Lap 45, and teammate Ericsson did the same.

Up front, Rossi, at the back of the top-five train, had pulled more than seven seconds ahead of Harvey and Pagenaud, a battle that ended when Harvey pitted on Lap 48.

Power pitted from second on Lap 51, and Rossi and Pagenaud did the same, while Rosenqvist made his second stop next time by, leaving Newgarden in front. When Rosenqvist emerged he just missed getting collected by Power who had been held up by Pigot who had yet to stop.

Meanwhile, Newgarden and Dixon were making hay up front, with Dixon pulling into pits on Lap 55. This time it was Dixon who had to succumb to Power as he emerged from pitlane, but Dixon had at least gotten ahead of teammate Rosenqvist.

Power, who’d now disposed of Pigot, then got held up by Andretti so he couldn’t stop Newgarden from emerging from the pits in a comfortable lead – and he was on new red tires.

On Lap 58, Dixon went past Power to grab second at Turn 1, Power repassed at Turn 2, but Dixon reasserted himself at T3. Once the Penske driver had admitted defeat, Rosenqvist tried to take advantage of Power’s lost momentum at Turn 4 but couldn’t find a way through.

Andretti finally got out of Dixon’s way by making his third stop on Lap 62. However, the reigning champion had some six seconds to recover in order to catch Newgarden.

His cause was aided by both Carlin cars holding up Dixon, so that Newgarden pitted for blacks at the end of Lap 79 while holding a nine-second lead. Dixon, Power, Rossi and Pagenaud pitted next time by, and Rosenqvist went a lap further but remained in fourth, three seconds ahead of Rossi.

His teammate Dixon ran seven seconds behind Newgarden who now looked unstoppable. The gap came down to just over five seconds, with Power a similar distance behind Dixon, but that was largely a result of where and when they hit traffic.

Newgarden had the time to pick his way carefully through traffic in the final 15 laps although Dixon closed the gap to under two seconds with ten laps to go while Newgarden was bottled behind Andretti. By the time Dixon had also disposed of Andretti, the gap was back out to two seconds.

Newgarden indeed had everything under control, and eventually won by 2.8998sec – the 11th victory of his career, and Team Penske’s ninth at St. Petersburg.

Dixon beat Power by 10sec, while Rosenqvist finished his IndyCar debut in an impressive fourth, just under four seconds clear of Rossi who had a relatively lonely race to fifth.

Some 13sec further back, Hinchliffe claimed sixth for Arrow SPM ahead of the third Penske of Pagenaud, while two more rookies – Herta and Ferrucci – took eighth and ninth, with Harvey claiming 10th for Meyer Shank Racing with SPM.