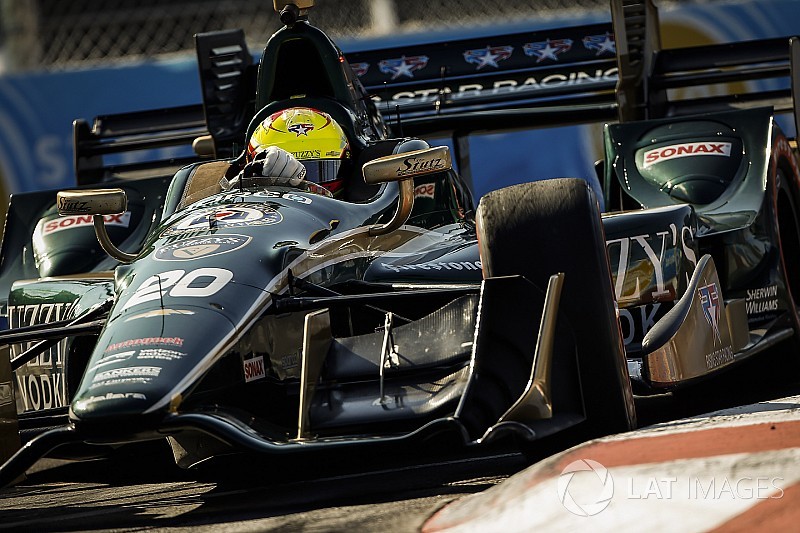 Right from the start of his sophomore IndyCar season, we’ve seen Spencer Pigot return to the daring, incisive and quick driver we saw in the junior categories. That form is making him a player in an intriguing silly season of speculation.

Anyone who worried that Spencer Pigot’s room-temperature rookie IndyCar season told us all we needed to know had to reassess the Florida-domiciled but Pasadena, Calif.-born driver from the opening round of the season. Slicing his way past far more famous names, he seemed destined for a top-five finish in St. Petersburg until his brakes caught fire (a brake problem rather than a Pigot problem). Since then, the results haven’t really reflected it, but he’s become a hot property once more, usually outpacing Ed Carpenter Racing-Chevrolet teammate JR Hildebrand in qualifying and showing none of the timid must-look-after-the-car attitude he displayed in 2016.

So although the results look roughly the same – 21st last year, 21st this (so far) – that’s a combination of bad luck and the fact that team boss Ed Carpenter takes over the #20 car for the oval races. The truth is that Pigot v3.0 looks very much like Pigot v1.0, the one we watched win the Pro Mazda and Indy Lights championships. He told David Malsher what has made the difference.

DM: Right from the start of this season you’ve looked fast and ready to fight. What’s happened since last year?

SP: Well, thanks for noticing. The big thing was having some time in the offseason to reflect and really study things in the offseason – work with the team to see where I was doing well and where I was struggling, and come up with ways to address those issues. We’ve got some really good guys at the team – engineers, driver coaches, Ed himself – and they all took time to work with me. And then I spent a lot of time in the simulator and at tests working on my driving style, and that found me a big chunk of time.

And then there’s coming back for a second time, you know so much more what to expect and what it takes to be competitive, how hard it is to pass people and how you have to take any little chance you get and capitalize.

So I don’t think I’m driving a huge amount different than last year but a lot of little things gained a few tenths here and there. And then I think we’ve also developed the car more to my liking. Last year, I did my first three races with alongside Graham [Rahal] and then alongside Josef [Newgarden] and both of those guys were well-established with their teams and so the cars had been developed around them.
So now, being able to work with the ECR engineers on what I think I need from the car, that’s a big chunk of it.

Have the little changes Firestone made to tire compounds this year thrown you a curveball in terms of your learning, or have they helped you by giving every team and driver something new to learn?

Hmm, I think it’s helped us that everyone had a bit more of an even playing field, but it’s still the usual suspects up front; the best teams still figure out the new stuff quickest.

I think this weekend at Watkins Glen, for instance, we’ve got a new red [softer alternate] tire to learn which may be good for us, because last year we had an issue on the reds – too much oversteer. But I think there were other teams that had an issue too so they went to black tires in Q2 and Q3. Well now we all have new reds, we’ve all got to learn things again, and that’s what racing is all about – drivers and teams overcoming new challenges, big ones and small ones.

Has this big step forward made a difference to how much attention you’re attracting from other teams for 2018?

Yeah, I think there’s some good interest there, definitely more going into this offseason than going into last offseason. I think I’ve shown there’s quite a lot of potential for us to run at the front, we’ve been good in the races, we’ve been pretty solid in qualifying – seems like a half-dozen times we’ve missed transferring by a couple of hundredths.

So if we can start regularly qualifying in the top 10, the strength of our race pace should allow us to race into the top five or six regularly. We’ve been able to do that a couple of times this year already, but it’s taken a massive amount of risks in the opening stints of the races to pass people as quickly as I could to get up there.

So if we stop making it hard for ourselves, we’re showing we can be up there. Last year I feel we had flashes of pace, but there wasn’t that much interest. This time we’re more consistent, and so the chances coming my way are bigger.

In light of JR Hildebrand having to re-learn IndyCar racing on road and street courses after his stop/start career, do you miss the presence of Josef Newgarden as a gauge of your personal progress?

Having Josef as a teammate was really good, I learned a lot from him. And obviously I don’t run the same weekends as Ed but I learned a lot from him too. And then Ed and JR – they haven’t been full-time for a while, they still have a lot more experience than I do, so there’s always something I can learn from them, whether it’s watching and observing at the ovals, or comparing data back to back with JR on the road and street courses.

Actually, there are so many other people you can learn from while you’re fighting them on the track, too. And when you see who you’re fighting and how that compares with previous years, that’s also a good gauge of where you’re at as a driver.

Looking at the spec of the 2018 car, the ideals behind it, and reading how Montoya and Servia have been describing the behavior, is that something that fits the Pigot driving style or is it a case of needing to adapt?

I think it’s both. It sounds very exciting because it sounds more difficult to drive. That will separate the drivers a little better because at the moment there’s so much grip and so much downforce that there’s not a big difference between us. I think there’ll be corners that are taken barely flat this year that will definitely need a lift in next year’s car, so getting back on the throttle at different times will naturally split us up.

It’s going to be difficult the first time with the new car at every track, especially for everyone who’ve been driving these aerokits for a while. You can go into fast corners trying to brake at the 150-board and suddenly discover that’s not possible any more. There’s going to be a lot of re-learning.

Jumping series, obviously you were a ‘victim’ of Mazda pulling out early from this year’s IMSA series to focus on their comeback with Joest next year. As a third driver, obviously you’ve been one of the stars in the endurance races [Daytona, Sebring, Petit Le Mans]. So 1) Do you have a different ride lined up for Petit? And 2) Are you hoping to work with Joest-Mazda next year?

As for Petit this year, I’ve talked to many people but the seats have gone to the drivers who they’ve already run in Daytona and Sebring. It’s cool to see Ryan [Hunter-Reay] back with Wayne Taylor Racing, though.

Obviously Ed Carpenter Racing is a strong team and continuity is often stated as a big deal within racing if you want success. But would you be interested in racing for a rookie team – for example, if your old friends Juncos Racing are able to make the step up to run in IndyCar full-time?

Well, I really hope Juncos get up and running in IndyCar. I think they could become a very strong team, and the Month of May this year was throwing themselves in at the deep end. It’s not easy to make your debut on a stage like that.

So yeah, if their IndyCar team gets off the ground, I have such a great history with them, so much respect for Ricardo [Juncos] and his team, I would definitely be happy to consider driving for them.

And as far as Chevrolet is concerned, have you got any particular ties with them or are you able to look at Honda teams too?

I wouldn’t say I have a particular tie with Chevy, but I’d definitely be happy to stay with them. They’ve been very supportive of us as a team and I’ve been really impressed with how they go about trying to improve every aspect of IndyCar racing that they have a say in, and how they work with their teams.