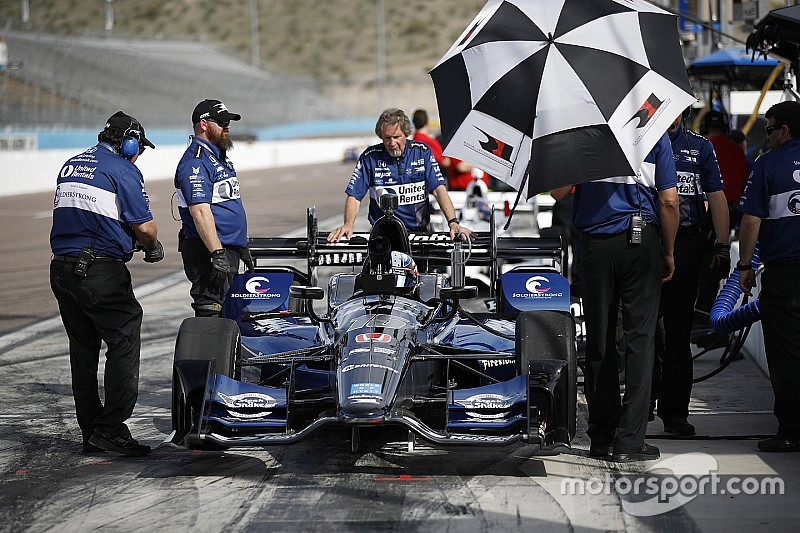 Graham Rahal, who suffered a spin and scrape along the wall in the final session of the Phoenix test, says he’s already noticing the technical progress made at Rahal Letterman Lanigan Racing-Honda over the winter.

Rahal spun through 180 degrees in PIR’s Turn 1, grinding along the SAFER barrier and bending the left rear corner of the car. But earlier today, he sang the praises of the engineering team at RLLR, in particular Tom German.

Last December, German joined RLLR as engineering consultant and to race engineer the second car whenever the team had sponsorship to run a Oriol Servia, who has so far got the Indy 500 and the Detroit double-header locked in.

Said Rahal: “Tom is a guy who was at Penske for 10 plus years and obviously was with [Alexander] Rossi last year. The biggest thing with Tom is to come in and implement some of the processes that a Penske does in areas that we aren't that strong.

“For instance, we've struggled with our car with massive tire vibrations the last couple of years. It killed me at Iowa last year – I had no hope. And already he's cured that in this test, with ideas and knowledge that he brought from Penske over the years. Stuff like that we were just struggling hard with, and Tom has brought a wealth of knowledge.

“It’s just another addition to our great core of engineering and people and mechanics and everybody. I think Eddie [Jones], Martin [Pare] and Mike [Talbott] and the whole core group of guys has done an excellent job. Everybody is working hard, and trust me, they want to be top Honda team once again, and we want to go fight for a championship like we have the last couple seasons. There's a lot of fire in their stomachs and they’re ready to go.”

“They're parked right next to us. We're seeing aero configurations on their car that we've never seen on a Honda before. With the tunnel and stuff that they have, they have access to learn that info, and we're sitting there looking at it going, ‘Jeez, what have they figured out that we haven't over the last couple years?’

“So they're going to elevate the game, too. We're all going to have to push very hard. I think here we're going to be lacking a bit of pace, particularly in qualifying, because my lap [this morning, a 189mph effort] was half decent; then I tried to trim more than that and about ended up in the fence, so I'm not sure how much more there is.

“We don't want to be just top Honda. Obviously we're all here to win a championship, right? That's what we're trying to do.”