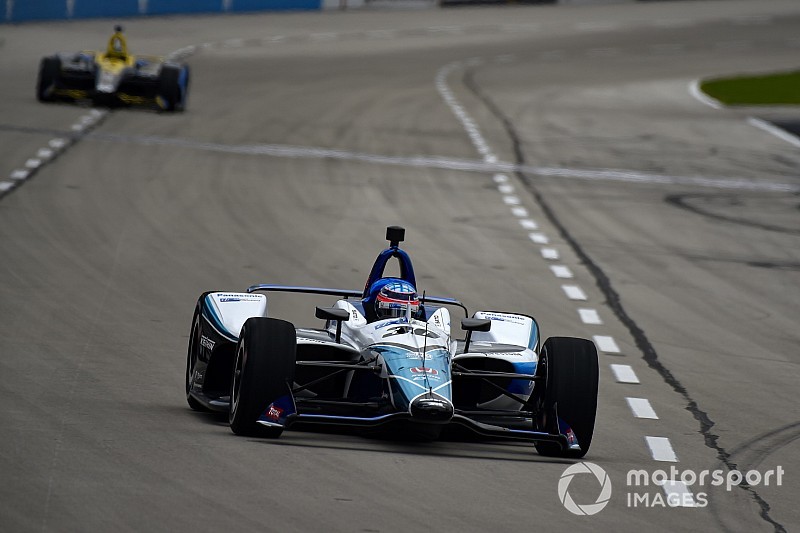 Takuma Sato, polesitter for this evening’s DXC Technology 600 IndyCar race at Texas Motor Speedway, says the competition should be fiercer than last year thanks to slightly more downforce and a revised Firestone compound.

Firestone brought two compounds to 1.5-mile TMS this year, with the right-side tires consisting of faster-wearing rubber that dissipates heat more rapidly, but also brought an additional compound in case there were still wide-scale blistering issues.

In fact, very few teams reported problems through practice, so that initial batch has been retained. In addition, the NTT IndyCar Series has allowed for 100lbs more downforce this year in an effort to allow cars to run closer.

Rahal Letterman Lanigan Racing’s Sato, who scored his ninth career pole yesterday and his third on an oval, said: “It's going to be more tight, close racing than last year because we have approximately 100 pounds more downforce than last year.

“But I don't think it's going to be pack racing, but it's getting somewhere close. It should really allow us to go two-wide in at least Turns 3 and 4. A bit of extra downforce, and I think the Firestone brought a great tire. We’ve seen so far its phenomenal performance.

“I think it's very exciting racing going on. Until really last stint, really last lap, we can't predict who is going to win the race.”

Asked about the possibility of tire ‘marbles’ as a result of a softer compound being used, Sato replied: “Honestly, I don't know. Firestone brought new compound and new construction tire, which gives the different structure for the tire and mechanism for making marbles. Marble tends to just slide off the surface, which means cars kind of sliding all over the place. That's what happens with the softer tire.

“Historically here in Texas, I don't think Firestone had any problem with the marbles. We can use the second lane as long as you have enough downforce and grip level. Now, of course, the start of the race probably difficult to go two-wide. At the start, you can and restarts you can. But once it gets settled, I think you have to wait until it gets dark and [we gain] downforce from the cooler temperature. Maybe at the second or third stint, you be able to see some of the cars go to the high lanes.

“Hopefully, by the second half of the race, we'll [also] be able to use the second lane in Turn 2. Then I think you can see a very, very exciting race.”

Sato also said he believes the tire-blistering problem that afflicted many cars here last year has been eliminated, although he admitted he hadn’t yet run a full stint.

“I did 36 laps on my tire,” he said. “That wasn't even the full tank either. [But] looking at the wear, looking at the internal condition in the tire, it looks very healthy.

“I've heard there is a few teams had a little sign of tire giving up. That's probably come from higher tire pressures. That's what Firestone reported. Hopefully, with the recommended Firestone tire pressure, I think we don't have any problem.”

“I think blistering was obviously a huge issue for us in terms of competition and safety [last year]. I think that's why Firestone made a great commitment to bring the tire here. Seems to be working really well with the addition of the downforce. It's definitely helping.”

“I reckon you’ll see the guys take it a bit easy at the start of the stints, but otherwise – if you take yellows out of the equation – a stint should be about 52-55 laps.”

The race is due to start at 7.40pm local (Central) time, by which time ambient temperature is supposed to have dropped from the current 92degF to 87.