Topsy-turvy emotions capped off the day in Alabama

After the IndyCar race on the road course in Birmingham, emotions ran high for the winner and several of his rivals from sheer happiness to disappointment.

At the end of Sunday's grueling marathon of a race at Barber Motorsports Park in Birmingham one driver stood relaxed and confident, even giddy, at the result. Another used the term "bridesmaid" to describe his emotions at the conclusion of a fourth consecutive second-place finish over the demanding road circuit, and a third was nearly in tears while being interviewed on national TV over his performance.

So given this remarkable trio of emotions it's hard to reconcile that the happiest guy was the one who finished last; and the one full of remorse was the winner.

Ryan Hunter-Reay drove to a hard-earned victory in the second IndyCar event of the season, withstanding a brutal physical punishment for 90 laps on a warm Alabama day to vanquish the field of 23 cars lined up for the start. It was his first victory of the year, and gave him a solid boost in the points race to defend his IndyCar championship of 2012.

"We really worked for it.

Hunter-Reay did indeed "drive his tail off" to stay ahead of a pressing Scott Dixon for much of the race, and the physical and mental toll was apparent at race's end.

"It was challenging out there today," he said. "We really worked for it. Unreal. I'm exhausted."

He then added with tears coming to his eyes that the race win was for his son, who remained at home for the day with wife.

It's no secret that Barber is a wicked test of driver endurance since its recent surface modification, with loads of 3-4G at multiple points along the 17-turn circuit. The improved grip and faster times that emerged in qualifications for the race offer testament to how much conditioning plays a part in success at the course.

Dixon took runner-up honors for the fourth consecutive year at Barber, a consistency of close-but-no-cigar finishes rivaled only by Panther Racing's string of second-place finishes at the Indianapolis 500 over the years.

"The car was super-fast, but we needed a longer race--maybe another full stint," he lamented at the end, begging the question whether his mental conditioning and physical endurance was greater than that of the completely tuckered-out Hunter-Reay.

James Hinchcliffe was shunted out of the race in the aftermath of a first-lap fracas that left his left rear wheel unhinged, and parked alongside the race track waiting for the yellow flag and a tow that never came. 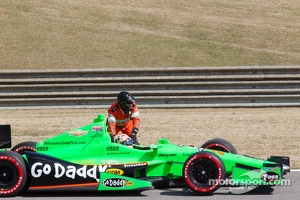 Hinch quipped post-race that he would have enjoyed the rest, opting for a nap while seated in the cockpit but for the noisy race cars constantly circulating around his new country residence in the Yellowhammer state. His car was parked behind a barrier in turn 9 of the course, available for a safety-truck tow back to the pits and possibly a repair that could have returned his car to competition.

"It's really rude of them," he quipped of his competitors and the yellow-free race that followed his accident. "Sitting in one spot all day was hard."

"I knew I had gotten hit, but everything was fine at first,” he continued. "Under caution (after the hit) I started to warm the tires up, but then the wheel actually broke. I was hoping race control would let us tow back and throw a new one on because nothing else was bent. But you dig yourself in a hole, qualify back there and these things happen."