The eight-time 24 Hours of Le Mans champion, Tom Kristensen, set the fastest time in the 2011 Le Mans Test Day on Easter Sunday. The Dane turned his best lap at 3:27.687 in the No. 03 Audi which ended up only eight seconds slower than the 2010 pole winning time.

We have prepared a comprehensive test program for all three cars.

"It was perfect for the whole team to complete the test day with the new car," said Kristensen. "For me it was the first time since 2003 that I've sat in a Coupe. The efficiency and the work of Audi have really impressed me. You can really feel the aerodynamics and the car is very comfortable. Already now we have gathered valuable information. As a driver, I very much appreciate the six-speed gearbox. It fits well to the engine with its down-sized cubic capacity."

The June classic is the most prestigious sports car race in the world and Audi has to be very pleased with the new R18 diesel powered prototype. Second was Michael Rockenfeller in the No. 01 Audi at 3:27.815.

Head of Audi Motorsport, Dr. Wolfgang Ullrich commented: "We have prepared a comprehensive test program for all three cars. The weather conditions allowed us to complete all our schedules. We have achieved very good results. I think that we can put that to very good use in the Le Mans race. It was important to do a lot of kilometers here with the all-new car before the race weekend in June comes up."

It appeared that Audi would end the day with the top three but Stephane Sarrazin in one of the Peugeot 908s clocked off a 3:27.876 to land third fastest in the team's newest diesel powered challenger. 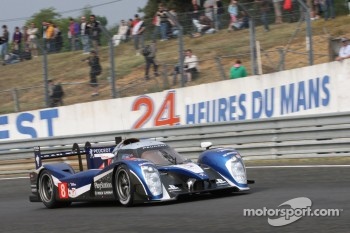 "We followed our development programme to the letter," Sarrazin said. "This is a new car, so we made changes to the set-up throughout the day. We managed a good result, with an efficient car that is also very enjoyable to drive."

Most of the on-track time was spent in what is truly, for many, a development test day, while for some it was to ensure they will be able to run this year's 24 race on the famous La Sarthe circuit. Besides the rookies who had to turn laps in testing, any driver who has not raced at Le Mans in the past three years was required to complete 10 laps to be eligible for the practice sessions in June.

It was a successful test day by the Automobile Club de l'Ouest (ACO), allowing many teams to work on their development of their finely-tuned racing machines. From aerodynamic setups to the smallest detail, the teams leave the circuit knowing what they still might need to change or work one. Both Peugeot and Audi entered three cars for this year's 24 Hours of Le Mans and they both put in over 3000 km for their trio of LMP1s today.

Emmanuel Collard was the fastest of the non-diesel challengers for the LMP1 class. In the petrol powered Pescarolo-Judd, Collard laid down a lap of 3:36.583, out performing the Aston Martin new baby. So far this year -- one race at Silverstone and now the Le Mans Test Day -- the AMR-One is not showing its potential with nagging problems. One can hope at Spa, the final shakedown prior to the June event, that the team finds the needed solutions.

The LMP2 teams were trading off fast lap times with Franck Mailleux in the No. 26 Signatech Nissan taking the top spot at 3:42.992. It is expected that the Orecas, Zyteks and Nissans will put on a good show come June. 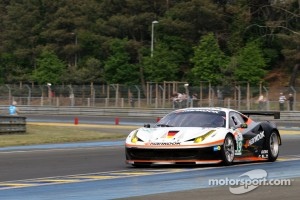 The always tight battles has been in the LMGT category and this year, they have a bit of separation so there will be two podiums: one for the GTE Pro and another for the GTE Am. The difference is that a gentleman driver in an older car (at least one year) will compete in the GTE Am versus the all pro lineups in the GTE Pro. Already this ides was proven at the American Le Mans Series 12 Hours of Sebring and the first race of the season at Silverstone for the Le Mans Series.

In the Pro class, Allan Simonsen laid down a best lap of 3:59.966 for the Hankook-Farnbacher Ferrari team. The new F458 Italia teams will not have it easy with the BMW and Porsche teams gunning for the Le Mans victory. While those three powerhouses in the class are the hands-down favorites to take the win, the Lotus teams are on a learning curve as they continue to develop their entries for the future.

In the GTE Am, it was not a surprise to a Corvette with the fastest time. However, the Corvette Racing drivers were also taking laps in the Labre Competition Corvette and mainly Tommy Milner who had to turn laps to ensure his being allowed by the ACO to compete in June. The American team will campaign in the Pro class of GTE in June. Milner was fastest in GT3 Am with a 4:04.222.

"Everything worked according to plan," said Corvette Racing team manager Gary Pratt. "Tommy Milner completed his mandatory 10 laps at the beginning of the morning session to qualify for the race, and then the other three drivers cycled through the Corvette C6.R to cover all the areas we had planned to work on. Only a rain shower in the morning and an incident between Olly Gavin and a competitor kept the car in the garage on two occasions. Despite those interruptions, we got the data we needed and tested all of the items we had on our list."