After two days of Practice and Qualifying at Le Mans the two Nissan powered Zyteks entered by Greaves Motorsport are fully prepared for the biggest race of the year, the 24 Hours of Le Mans. The team has used the track time to concentrate on setting up the cars to achieve the optimum balance that will be required in a race that is likely to see changeable weather conditions. 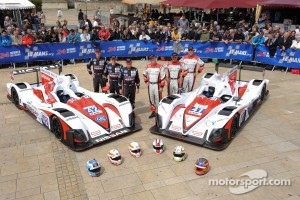 Christian Zugel: “For me, just being here at Le Mans is a victory of sorts. I have no illusions about my own abilities. I know I will never be as quick as the others in my car, but as long as I can keep it out of trouble, maintain the best average lap time that I can, and hand back the car in a good condition, then I feel I won’t have done a bad job. This is all I could ever dream of, and I couldn’t hope for more. Racing in the Le Mans 24 Hours is a huge personal achievement for me and I feel humbled just to be here and taking part.”

Elton Julian: “Obviously I am looking forward to the race, it is a big event. We have made a good preparation, the team is ready, the drivers are ready. We have stuck to our plan, which is a conservative one, a long game one. We have to keep a cool head from the start, right to the end and we will see how the race pans out. We think we will competitive over the whole distance but this is Le mans and you never predict what will happen.”

Ricardo Gonzalez: “It’s been a great week and an unforgettable experience at Le Mans. Even though we are all tired from all the activities, the parade last night, and the enthusiasm from the fans has given us the energy that we needed to be ready for the race, the fans here are like nothing I’ve ever seen.

So far we’ve had a pretty good week, even though we weren’t that quick in Qualifying, we aren’t worried about it. It’s really not that important for such a long race. The whole week we have concentrated on the race and we have achieved a comfortable and stable setup that we can drive throughout the whole day. The team has done a great job and we are ready for the challenge, now we just need to stay focused, stay out of trouble, and make sure we are in contention with a few hours to go.”

Alex Brundle: The circuit is amazing, the people crazy, the weather is bad right now, but hopefully we will have a good race. Qualifying was good, I think that we have realised the potential of our race car. Hopefully we can continue with this course and deliver our potential during the 24 Hours, it will be a long and hard race, especially in view of the changeable weather conditions.”

Martin Brundle: “We focused on the race today. It’s important that the car is balanced for all three of us and I think we have a good race car now. The pace here is quite something when you consider that the top LM P2 time is only a second off the bottom few LM P1 cars. Our job in the race will be to out perform our competitors over the race distance, rather than try to out pace them. We’re totally ready for the race. The car is good on its tyres and all three of us have similar pace. What you need at Le Mans is a drivable car and that’s what we have so we are all feeling confident.”

Lucas Ordonez: “I feel more confident and generally more ready for this than last year. It was stressful last time but I have a great feeling about this race. We have a car that is easy to drive in race trim and we are all ready for what lies ahead of us. We are a good team and I think we did the sensible thing today and got ourselves prepared for the race, rather than going for pole. We may not be on pole position but we are in a great position for the Le Mans 24 Hours.”

Greaves Motorsport Team Manager, Jacob Greaves, summed up the team’s position. “We came to Le Mans with a plan that focused on optimising the cars, drivers and team for the race. So far we have stuck to our plan, now we have to try and execute it during the race. It will not be easy particularly in view of the changeable weather conditions but are quietly confident that we will get a good result.”