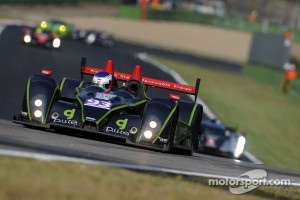 After a second place showing in Baltimore, Genoa Racing will hop across the pond to compete in the International Le Mans Cup round in Silverstone, England this weekend. Partnering with the London Project, a charitable foundation created to raise awareness of the vision ailment Age-Related Macular Degenerative Disorder, Genoa will field an ORECA FLM09 prototype for three new pilots.

With Genoa sitting a strong second in the ILMC points standings, the pressure will be on the trio of Aldous Mitchell, Jordon Grogor, and Bassam Kronfli, veterans of the Gulf Radical Cup and ILMC, to continue the strong performance of team regulars Elton Julian, Jens Peterson, and Christian Zugel.

The task ahead is the prestigious Six Hours of Silverstone on the famous course that was once a World War Two air force base. Much has changed since the legendary circuit was converted from airfield to race track in 1947. The first races were held on the triangular layout of runways with bales of hay to demarcate the course. Today, SAFER barriers and catch fences take the place of the rudimentary walls of hay, and a purpose-built racecourse has replaced the old airfield runways, but it is the history of Silverstone that has made it legendary.

Genoa and the ILMC are looking to add another chapter to the storied history of Silverstone when they take on the demanding 3.66 mile, 18 turn circuit for six grueling hours.

The #93 London Project/Genoa Racing entry will hit the track for open practice Friday between 2:15-3:15 PM and later at 6:00 PM and 7:00 local time. A third hour of practice for the six hour endurance event is slated for 10:00 AM Saturday morning, followed by FLM class qualifying from 3:05-3:25. The Six Hours of Silverstone will commence Sunday at 12:35 PM.

The London Project is a collaboration of Professor Pete Coffey from University College London and Dr. Lyndon da Cruz, a retinal surgeon at Moorfields Eye Hospital. The aim is to combine cutting edge knowledge and technology from the laboratory, clinic and operating theatre in order to accelerate the development of new treatments for Age-Related Macular Degenerative Disorder.

Genoa Racing has competed at the top level of worldwide open-wheel and sports car racing for nearly 30 years. The team has raced in the American Le Mans Series, Formula 3000, IndyCar, Indy Lights, Formula Atlantic and Can-Am competition, with a series championship, 19 victories and 21 poles. Genoa also recorded a front-row starting position in the 1998 Indianapolis 500 in conjunction with Thomas Knapp Motorsports.

Genoa Racing is owned by Angelo Ferro, a businessman who is the largest producer of table olives in North America. He also owns AngRay Fantastico flower market in San Francisco, two car dealerships, a five-star hotel in Santa Rosa, Calif. and an automobile restoration shop.

The ORECA 03 of Thiriet by TDS Racing and Pecom Racing on the podium!