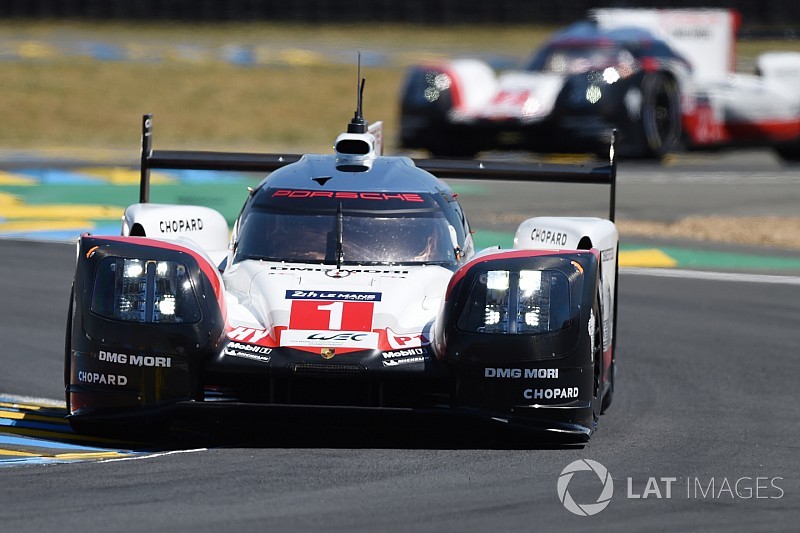 Porsche continues to hold a massive advantage in the 85th Le Mans 24 Hours with seven hours of the race remaining, as daybreak arrived at La Sarthe.

Andre Lotterer did the bulk of the ‘graveyard shift’ and ensured that he and his teammates in the #1 919 Hybrid, Neel Jani and Nick Tandy, enjoyed a massive 11-lap lead over the #38 DC Racing Oreca LMP2, which held second overall, by 8am local time.

Such was the advantage of the #1 Porsche that Lotterer was able to cruise through the early morning at a sedate pace, often lapping anywhere between four to eight seconds off the remaining two ‘catch-up’ LMP1 runners.

The gap was such that it effectively gave the reigning WEC title winning car a one hour buffer over the opposition, with Jani taking over from Lotterer at around 6am.

The delayed #2 Porsche 919 Hybrid of Hartley, Bernhard and Bamber made up ground and had progressed to 10th position overall as it continued its recovery drive from an earlier MGU change.

Toyota’s sole remaining TS050 Hybrid, the #8, placed 16th overall but continued to progress up the overall leaderboard with Kazuki Nakajima comfortably the quickest man on the track during the 13th and 14th hours before handing back over to Sebastien Buemi.

The two other Toyotas had long since retired after the leading #7 car suffered clutch issues and the #9 car was hit by the #25 Manor Oreca of Simon Trummer, causing terminal damage.

The LMP2 battle largely centred around the #38 Jackie Chan DC Racing Oreca and the #13 Rebellion car as they took turns in not only leading the class, but also fighting for second place overall.

Oliver Jarvis and Nelson Piquet Jr traded quick times with new rubber just after the halfway mark of the race, but it was the Jota Sport-run car with one of Jarvis’s teammates, Ho-Pin Tung, which held the advantage at 8am by around 20 seconds.

The #31 Rebellion, which earlier led the category, dropped back after losing time first in a pitstop and then when Canal stopped on track and lost over a minute. Nevertheless the car still placed third, albeit now within reach of the fourth-placed #35 Signatech Alpine.

There were several incidents for LMP2 cars as dawn broke, the most serious of which saw Emmanuel Collard suffer a race-ending accident in the #28 TDS Racing Oreca.

The Frenchman emerged relatively unscathed from the sizeable impact, which brought out the third Safety Car of the race for just over 30 minutes in the 15th hour.

The intensity of the LMGTE Pro showed no sign of letting up, as Aston Martin held a narrow lead as 8am arrived.

After its early puncture, the Marco Sorensen, Nikki Thiim and Richie Stanaway-crewed #95 car completed impressive fightback to lead the way from the #91 Porsche 911 RSR, which was helped back into contention largely thanks to the Collard-induced safety car.

Ferrari’s chances took a hit just before 8am when James Calado’s #51 car was involved in a collision with the #90 TF Sport Aston Martin, and had to be wheeled into the garage with significant front-end damage.

Ford was still in with a shout of defending its crown as the #67 entry ensured the Blue Oval held a place in the top five, along with Corvette’s leading #63 entry and the second Aston Martin, the #97 car, which had led at the halfway mark but was delayed in a safety car.

But there was drama for the #92 Manthey-run Porsche 911 RSR of Michael Christensen as he crashed into retirement at the Ford chicane after hooking a kerb.

JMW continued to rule the roost in GTE Am division, as Will Stevens stretched the #84 Ferrari’s advantage over the similar #55 Spirit of Race-run 488 GTE to over a minute.

The #62 Scuderia Corsa made it an all-Ferrari top three in class.