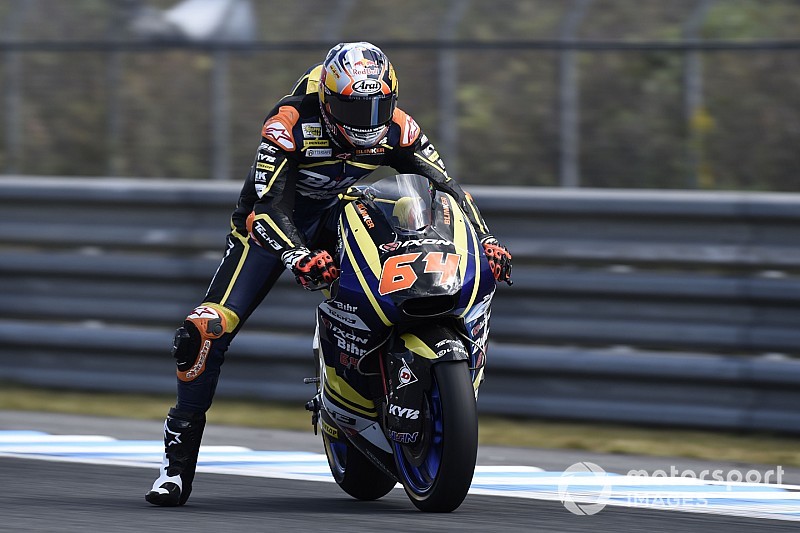 Bo Bendsneyder has been sidelined from this weekend's Moto2 race at Phillip Island, thanks to a bizarre leg injury caused by an engine explosion in Japan.

The Tech 3 rider had his left tibia broken by shrapnel sent flying by an engine failure on the last lap of the Motegi race.

He's been recovering in Okubu Hospital in Tokyo ever since, and won't be fit in time for this weekend's Australian Grand Prix.

The team has drafted in Aussie Superbike regular Bryan Staring as a replacement, who heads into the weekend with zero experience on a Moto2 bike.

The West Australian did, however, spend the 2013 MotoGP season on an FTR Honda.

“I’m really excited to come and ride Moto2, the first time for me ever in this category," said Staring.

"Actually, it’s such an honour to be able to race at the Australian Grand Prix, which is my home GP.

"A massive thank you to [team boss] Herve Poncharal for giving me the opportunity on this special bike, and also to Kawasaki Australia for allowing me to do this event.

"I have really no expectations, but a lot of anticipation. I’m looking forward to go out on the bike and enjoying the weekend."

Bendsneyder is targeting a return for the season finale at Valencia next month, thanks to the break being clean and his initial treatment effective.

"I immediately suffered from my left leg and it turned out that a piece of metal had shot from the engine against my leg, or actually in my leg," Bendsneyder told Dutch TV show Peptalk.

"I was able to put the bike aside and luckily I could still get off. I immediately layed down and asked for help. Luckily I was treated well right away and that helped.

“It has never happened before in our class that a piece of metal flew out of an engine. I was very lucky. In the end the boot I’m wearing offers a lot of protection, but the piece of metal from the engine went through it.

“It is broken well, even though it is broken. With a good plate on it I can in principle be back on the bike within three or four weeks. I will go for that.

"The last race of the season is in three and a half weeks [in Valencia], and I hope to return."