He is the third teenager at world and European championship level to die in incidents in 2021, following 14-year-old European Talent Cup rider Hugo Millan in July and Moto3 rider Jason Dupasquier in May.

This recent tragedy has sparked a debate about how the sport of motorcycle racing can stop such events from happening in the future, with age limits, grid reductions and bike changes in junior road racing categories all discussed.

Dorna Sports – which owns MotoGP and World Superbike – confirmed to Motorsport.com earlier this week that a working group within the company has recently been set up to discuss these matters.

Ducati rider Miller – who knows one of the riders involved in the Vinales incident – says he’s “getting sick” of attending moments of silences during race weekends and feels the junior classes must change going forward to stop these tragedies.

“We’ve had this discussion in Moto3, but there even in Supersport [300], those bikes aren’t very fast and there’s so many of them, and those bikes are not light by any stretch of the imagination,” he said in response to a question from Motorsport.com about the situation concerning junior rider fatalities.

“For sure it’s a lot of weight and there’s so many of them on the grid that, when something does unfortunately go wrong, the chance of something bad happening is for sure doubled or tripled.

“The racing’s fantastic and I think the classes are fantastic.

“I think it’s so good to have a feeder class like World Supersport 300 to help these young kids who may not get a chance in Moto3 to come through that way.

“But there has to be a big step taken in looking at the safety, at the way these races go and this can’t continue on.

“This year’s been especially bad, but this can’t continue on. We can’t have three young kids in the space of not even nine months losing their lives.

“It’s atrocious and I think I stand on behalf of everybody in saying I’m getting sick and tired going to these minute of silences for kids that were so, so young.

Six-time MotoGP world champion Marc Marquez believes Dorna is doing its best “to protect us” in the instances of tragedy, while also constantly working to improve safety.

But he feels the biggest issue is the sheer number of junior categories around in the modern day, which is only increasing the risks.

“About Dorna, they are trying to protect us and they are trying to improve on the safety, on the circuits, on the leather suits and the helmets,” he said, when asked by Motorsport.com if he felt MotoGP offered enough support to riders during times of tragedy.

“But the risk always will be there. It’s true that, if we compare to 20 years ago, now there’s double the categories, double the riders on track.

“I mean, when you say we are working for finding young talents, it means more categories, more riders on track, more risk.

“It’s something difficult to manage, difficult to find a good compromise, but now one of the things is I will say this: we have a lot, a lot of categories. Every weekend we have some racing – GP, Superbikes, World Superbikes, European Championship.

“That means there is more risk than in the past of course.” 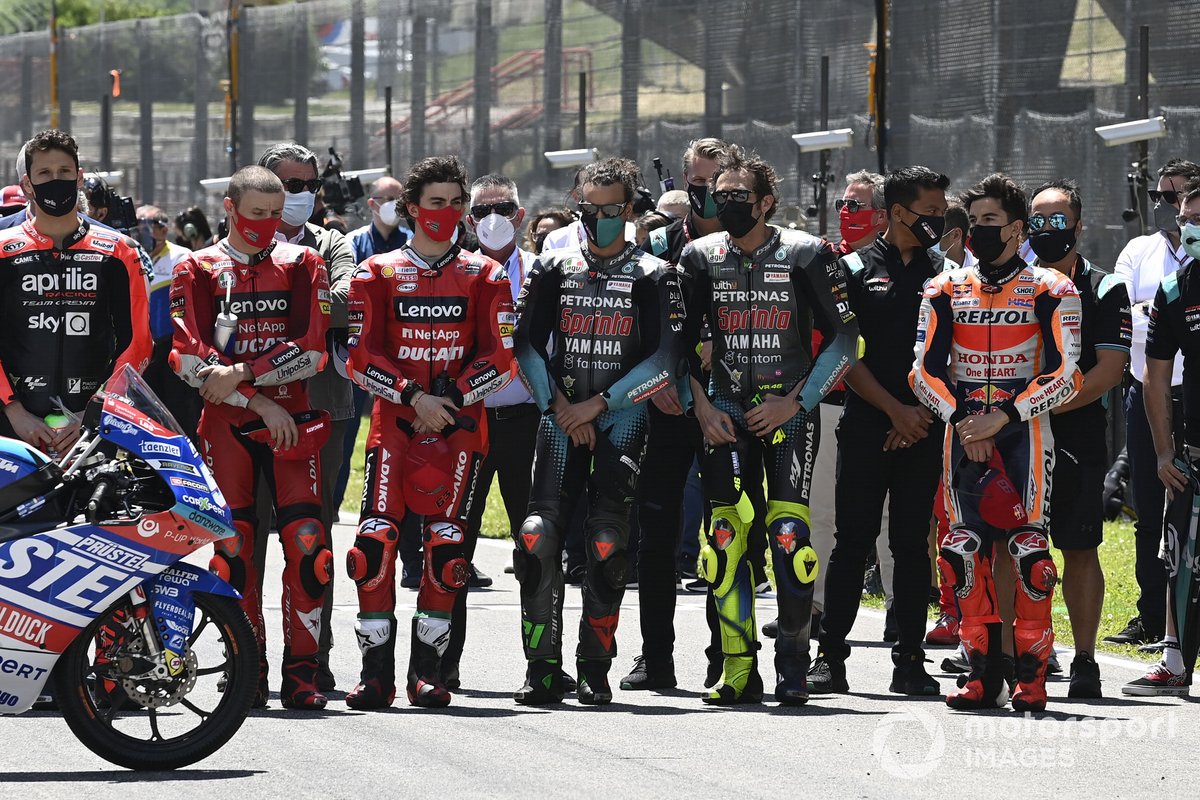 Aprilia’s Aleix Espargaro echoed Marquez’s concerns about the number of series where Moto4, Moto3 and Supersport 300 machinery are being raced.

While he thinks an age limit increase should be discussed, Espargaro also feels young riders should be forced to spend longer honing their skills on much safer minibikes on karting tracks.

“It’s not just about 16 on the world championship, because 16 is not that bad,” he said.

“But yeah, we could go 17. But the problem is you can go to a big track like Barcelona with a Moto4, which is almost Moto3, at 12 years old I think.

“So this, for me, is worse. The school of the minibikes on the kart [tracks] is good, so maybe they can stay more time in minibikes where the speed is a lot lower, where two riders can have an accident together and nothing happens, and they can postpone one or two years the arrival into a big track.

“So, in the past the popularity of the minibikes was very high, but now everyone wants to do Moto4.

“We’re doing many classes, Supersport 300, everybody on the big tracks.

“Maybe this is a solution also, to race more on karting tracks because maybe there I think the kids can learn the same or maybe more.”

Following his cousin’s death, Maverick Vinales has elected to sit out this weekend’s Grand Prix of the Americas – a decision Aprilia has thrown its full support behind.

Reigning world champion Joan Mir says Aprilia’s gesture is “appreciated” by the rest of the grid.

“Well, I think that when a tragedy like this one happens, I see everyone really feeling this kind of loss and looks like when something like this happens we all are together and this is something nice, because this can happen to every one of us and it’s a really difficult situation,” Mir said.

“I completely understand Maverick doesn’t feel well to come here and the decision of Aprilia always is really nice.

“I think that the riders appreciate this kind of thing, and I hope this doesn’t happen again.”