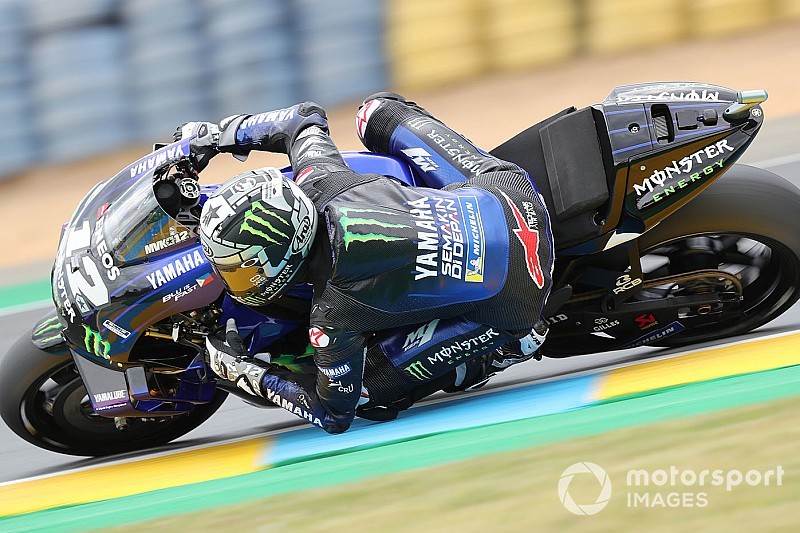 Maverick Vinales set the pace in a wet third MotoGP free practice at Le Mans, as championship protagonists Valentino Rossi and Alex Rins were among those consigned to a Q1 appearance.

Rossi and Rins had been left outside of the combined classification top 10 on Friday, and light rain falling on the circuit ahead of Saturday morning practice meant neither got the chance to force himself back into contention for an automatic Q2 spot.

Track conditions meant riders were initially as much as 17 seconds off the pace at the start of FP3, although the pace gradually came down from there, with Vinales, Honda man Marc Marquez and Petronas SRT Yamaha rider Franco Morbidelli emerging as the class of the field in the first half of the session.

The trio were the first riders top dip below 1m45s, with Pramac Ducati's Jack Miller joining them shortly after halfway point and whittling the benchmark down to a 1m44.211s.

With just over 10 minutes to go, the works Ducati of Andrea Dovizioso found half a second on Miller's effort, but the Italian's lead was short-lived as Marquez jumped to the top with a 1m43.437s.

The reigning champion improved by another three hundredths later on, only to be immediately dethroned by a 1m42.951s from Miller.

Vinales then went a tenth quicker than Miller, before Marquez lowered the benchmark to a 1m42.684s as the pair set out on their final laps.

But while Marquez had been ahead of Vinales after two sectors, his lap faded as the chequered flag flew, and he came up 0.180s short of his Yamaha's rival 1m42.498s effort.

Miller pitted before the end of the session and ended up a quarter of a second down on Marquez, but still comfortably secured third – with Rins in fourth almost half a second down.

KTM's Johann Zarco – who will be contesting Q1 - broke into the top five with his final attempt, while Ducati's Danilo Petrucci in sixth place was the last rider to lap within a second of Vinales.

Jorge Lorenzo (Honda), Pol Espargaro (KTM) and Dovizioso were next up, with Rossi completing the top 10, 1.4s off his works Yamaha teammate's pace.

Joan Mir, who crashed at Turn 13 during the session, took 11th for Suzuki and will join factory squadmate Rins in Q1.

Also heading to Q1 are Cal Crutchlow and Morbidelli, the LCR Honda man finishing 0.001s ahead of the satellite Yamaha to claim 15th place.