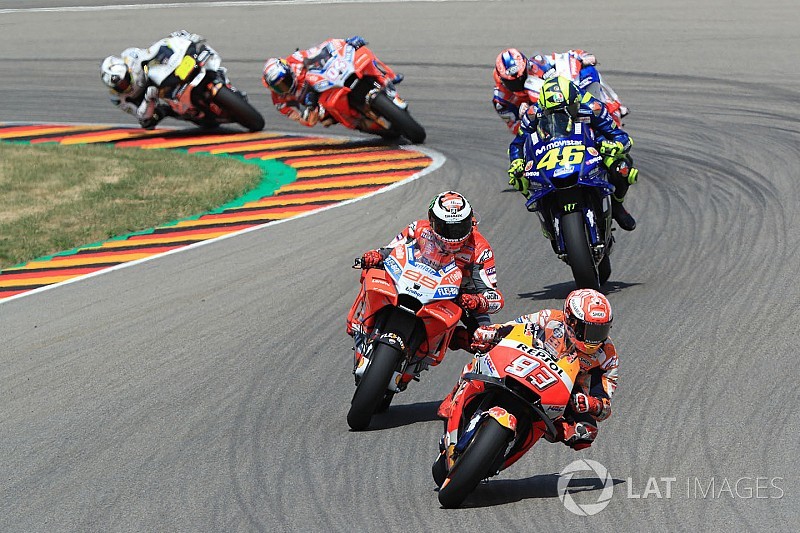 MotoGP championship leader Marc Marquez says he expected a sterner challenge from the works Ducatis in the Sachsenring race.

Marquez started the German Grand Prix from pole but gave up the lead to Ducati's Jorge Lorenzo off the line, with Lorenzo remaining out front for the next 12 laps.

Lorenzo was ultimately passed by Marquez and soon began to fade, while teammate Andrea Dovizioso's expected challenge never materialised, with Yamaha pair Valentino Rossi and Maverick Vinales completing the podium behind Marquez instead.

Asked whether the fight for victory played out as he expected, Marquez said: “Maybe the two guys that I missed – well, [I say] 'I missed', [but] for me was good news – but, after the practice, was the two Ducatis.

“I saw Lorenzo was pushing a lot in the beginning, then I see immediately that he start to drop a lot.

“I say, okay, now is time to overtake, it's so difficult to overtake Ducati riders but I was able to overtake him and then just try to keep pushing.

“And the other guy, Dovi, that in the race pace, on the warm-up, in the FP4, he was very fast, but then looks like he drop a lot the pace on the race.”

Lorenzo, who had to settle for sixth, said his loss of pace in the race was not down to the return of his stamina issues, but rather a consequence of having to use the medium rear tyre.

“The problem was the medium was the only choice we had," said the Spaniard.

“I tried to be so smooth on the throttle from lap one, but even like that, from the middle of the race to the end, it was impossible to have normal acceleration, even if I was smooth on the pick-up area.

“The rear of the bike was shaking with no traction. This was the main problem, not the physical condition.”

Dovizioso, who finished seventh, admitted that he was expecting a better outcome – but stressed that tyre drop-off had made it very difficult to make accurate predictions.

“I expected more, because you have to expect more,” he said. “But [at] Sachsenring [it] is impossible to know before the race what you can do.

The Italian was buoyed by the improvement Ducati made at what had been a difficult track, but was disappointed to finish as its fourth-best representative, behind not only Lorenzo but also fourth-placed Danilo Petrucci (Pramac) and fifth-placed Alvaro Bautista (Nieto).

“The reality is we are much faster than last year, this is the positive things, during the practice and at the end of the race, so this is the reality,” he said.

“And I am so happy about that. But our bike is a bit better, but with the same DNA. In the fast corner, we can't accelerate and we can't make the same speed as Honda and Yamaha, like always.

“So this is the reason why in the race we're struggling more and we have more drop on the rear tyre. It's normal.

“The point where I'm not happy is, I was the fourth Ducati. So it means, there was the chance to make something better, this is the negative point.“