Marquez must "attack", not "relax" with 41-point lead 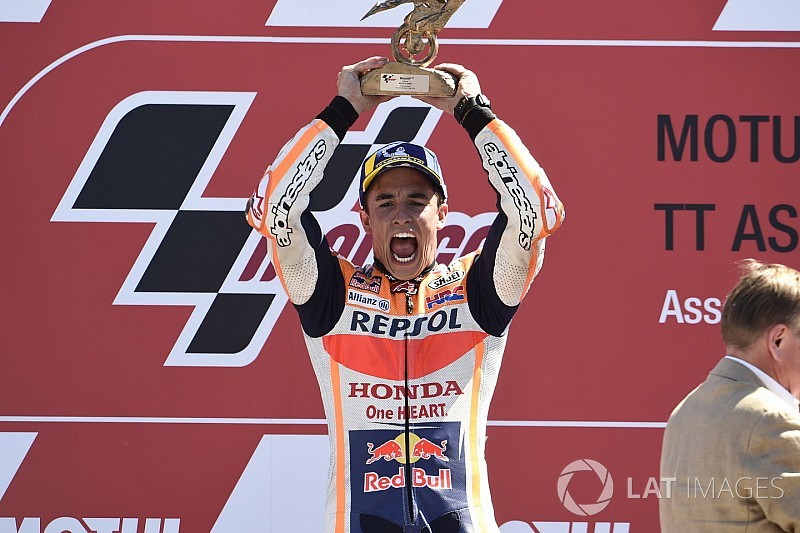 Marc Marquez insists he will not "relax" after building a 41-point MotoGP lead by winning the Dutch TT, but will "attack" instead with favourable tracks coming up on the calendar.

Marquez continued his superb 2018 campaign with a fourth win of the season at Assen, having finished every race in the top two except Mugello - where he crashed - and Argentina, where he was penalised.

The reigning champion's advantage is now up to 41 points as closest challenger Valentino Rossi finished only fifth in Holland  and fell a further 14 behind.

When asked if he can relax now regarding the championship, Marquez declared he wants to continue pushing in the next rounds of the championship at the Sachsenring, where he is yet to be beaten in MotoGP, and Brno, another strong track for Honda.

"Honestly speaking, before the start of the [Assen] weekend I say okay, maybe in this race track we will lose some points, but we gained and we gained a lot," said Marquez.

"This doesn't mean that we will relax. Opposite, time to attack because we are in a distance that is big, but not enough.

Marquez said he was happy to see Alex Rins finish second as he was able to further extend his lead in the standings.

He added: "When I'm across the finish line the adrenaline was there but then I check the big screen and I see Rins second, I was even happier because then the advantage is even bigger and this is something that we need to take profit."

While his closest challengers in the standings are Yamaha trio Rossi, Maverick Vinales and Johann Zarco, Marquez has now won at two traditional Yamaha tracks Le Mans and Assen respectively.

"Here I expect that maybe Valentino and Vinales would be very strong," Marquez explained. "They were strong, but we were stronger.

"Is important that in a track that in the past Yamaha was very strong and we were struggling, I was able to be there and I was able especially on the practice.

"More in the race, okay [it was more difficult, but] on the practice I was able to have the best pace and then on the race when I was leading in the last laps."