Marquez won't be fully fit for start of testing in 2020 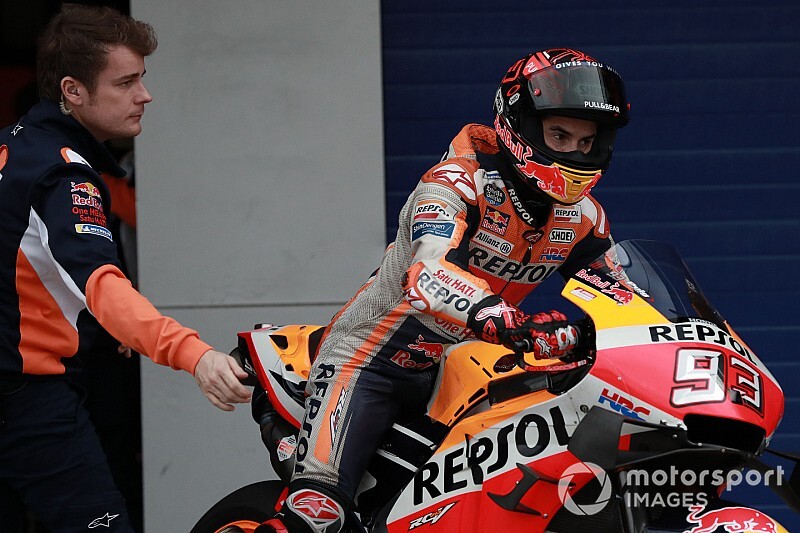 The doctor who operated on MotoGP champion Marc Marquez’s shoulder says the Honda man will not be fully fit for the start of testing in 2020.

The Honda rider partially dislocated his right shoulder in a heavy crash during qualifying at Sepang, and aggravated it further in a tumble during last week’s Jerez test, after which he took the decision to go under the knife in Barcelona on Wednesday.

Doctor Xavier Mir, who carried out the successful operation with his team, says he expects Marquez to be able to ride in the first test of 2020 in Sepang in early February - but reckons the champion won't have recovered completely.

“It is difficult to evaluate,” Dr Mir told motogp.com when commenting on Marquez’s recovery time.

“We are also used to recover periods for normal people with this kind of injury being four months. The riders are used to reducing them to almost half.

“He’s always upbeat, he always seems happy. In the operating theatre he was happy, talking with the nurses.

“He is a person with a very likeable personality and this time he was in a lot less pain and was even more upbeat.”

Marquez had dislocated his left shoulder in training during the ’18 pre-season, with the issue recurring across the campaign and eventually requiring a “complicated” operation at the end of the year.

Dr Mir believes that without this latest surgery Marquez would have suffered further dislocations during the ’20 season.

“During the season he would have had more dislocations and the injury would have become like the one he had on the left shoulder,” he said.

“That was a much more complicated operation, with a recovery time initially much longer and this is why he’s made the decision.

“The operation last year had two parts: an open surgery with a small wound, and a second time with an arthroscopy.

“The arthroscopy requires putting a lot of liquid into the joint, which can cause inflammation that can last several days, and on this occasion we’ve been able to avoid this because the injury wasn’t as severe.”