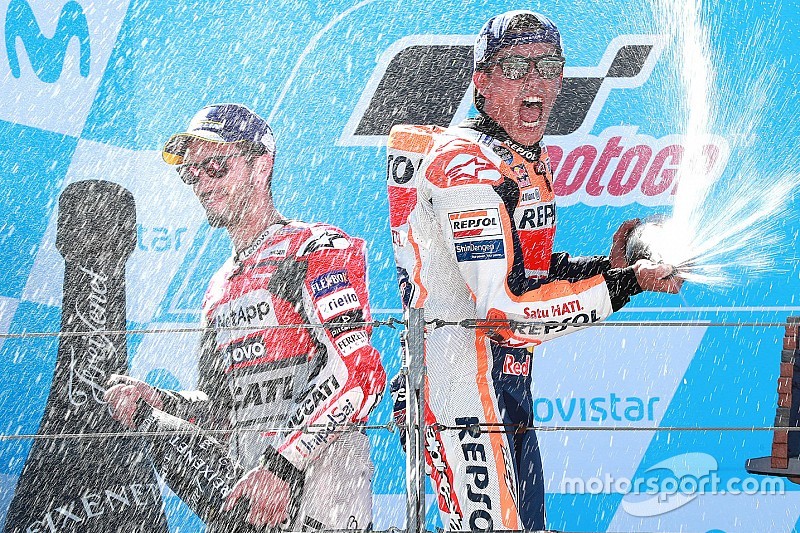 Aragon Grand Prix winner Marc Marquez said a tyre choice gamble was the "only chance" to beat Andrea Dovizioso, who was the favourite going into the race.

At a circuit where tyre management is crucial, the majority of the MotoGP field, including Marquez, used the hard rear tyre in FP4, looking set to run that compound in the race.

However, Marquez decided to switch to a soft rear in the end, as he felt this was the only way to challenge for victory.

"I got up this morning I say okay, I want to take a risk today," said Marquez, who ended up winning the Aragon GP and stopping Ducati's three-race winning streak.

"In the warm-up I didn't feel well but I pushed, I crashed and then I start to think why I crash.

"Then we speak together with Santi [Hernandez, crew chief], with my technician and I say to him, and he say to me, he was a little bit agreeing already - 'I want the soft rear'.

"Then started a big meeting, discussions inside the team, with HRC because I did not try that soft tyre in the afternoon in hot temperature but I say I believe on this one, I can manage.

"Another thing is, was the only chance to fight against Dovi because with the hard I felt good but for my riding style was not working in a good way, especially on the entry.

"I am very happy with this win because for me was long time without finishing in the top.

"I know that here I will have a great chance but during all weekend I was fast but Dovi was very very fast, was the strongest guy."

"Another great fight" with Dovizioso

Marquez had exciting late-race duels with Dovizioso in last year's Austrian and Japanese Grands Prix, as well as this year in Qatar, but the Honda rider ended up losing out on all three occasions.

On this occasion he made the decisive pass with two laps to go, breaking away after that to win by over six tenths.

"Was a great fight, great movement in the limit but always with that respect and another great fight with Andrea.

"But this time I say I will not wait until last corner, I will attack before because was the only chance to win the race.

"When I was behind him on the race, I feel really good, really smooth, he really push a lot in the mid-race.

"Then I say, okay, now it is time to push, I was able to follow him and then I start to see that he was sliding too much, more than usual, and I say, okay, we will arrive until the end."

Lorenzo: "Marquez destroyed my race and my foot"