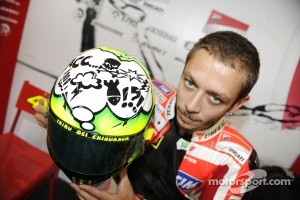 Misano’s Gran Premio di San Marino e della Riviera di Rimini was positive for Valentino Rossi from a number of perspectives. After making a change in the morning warm-up, the Italian had a great start in the race and maintained a fast rhythm for a good part of the 28 laps, enjoying some nice battles with Spies, Dovizioso, and Simoncelli in front of his home crowd.

His rhythm dropped a little toward the end, but the work carried out by his team and the base settings used for the race are promising for the next round at Aragon in two weeks.

Following a strong warm-up and a good start, Nicky Hayden fell while exiting Turn 15 on the third lap, and he wasn’t able to return to the track.

“I’m pretty happy because we didn’t expect to do this well. I didn’t think I’d be able to stay with the second group, which is our goal at the moment, and instead we managed it for half the race. We still weren’t able to attack like we’d like to, but anyway, we were right there. I started really well from the fourth row, and I was a little crazy through the first three corners because I had to push even though there were some raindrops. It was nice after that. I stayed with ‘Sic’ and ‘Dovi’ for a little while and also battled with Spies, and we maintained a good pace. This morning we made a good change on the front, and if we’d done that yesterday I probably could have started closer to the front. It ended up being one of my best races of the year, although of course we have to remember that we’re only talking about seventh place. Still, it was a nice race in front of a good crowd. We’re fairly satisfied as we wait to take the necessary steps forward.”

“It was obviously a disappointing race. The team did a good job, as they made a couple of changes overnight, and this morning I was able to go a couple tenths faster than in qualifying, with a good rhythm. I thought we had a better chance for the race. It was raining a little bit at first, which is normally good for our bike. I got a decent start, felt good, and was going to take a few chances to try to get up as far as I could. Then I lost the front on the exit of Turn 15 and—bam!—I was down. We looked at the data, and I’m not really sure why I crashed. We were tip-toeing because of the rain, so maybe the left side of the tyre wasn’t quite up to temperature, although it was still rider error. This track has been the worst one on the calendar for me. I certainly could use some good luck, and maybe we’ll get it at Aragon.”

“I think today presents some positive aspects that have to be considered. We made a change to Valentino’s bike that allowed him to maintain a better rhythm in the race than he had managed in practice, and he was able to fight: he had a really good start and then rode fast for as long as he could. Of course I’m sorry for Nicky’s crash, because he really had a nice warm-up this morning, and he also got a good launch off the start and passed a lot of riders. We’re working really hard, and next week we’ll be back on the track at Mugello for three days of testing.