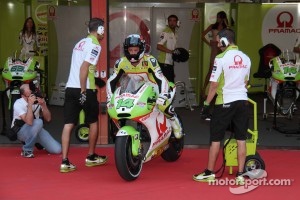 The starting grid for the Aragon Grand Prix was finalized in this afternoon’s qualifying session. There’s frustration in the box of Randy De Puniet, who had the third-best time just a few laps from the end of the session, having posted a 1:49.826 with a hard tire. However, the Frenchman wasn’t able to improve on that at the end, when using the soft tire. Loris Capirossi continues to gain confidence on the Spanish circuit. Since the first free-practice session, he has improved his best time by more than three seconds. The MotoGP veteran will start from the sixth row.

“It’s a shame, because we did a good time with the hard tire. Randy made a few mistakes with the soft tire, and he told us he could have cut off at least three tenths. We could have started from the third or even the second row. Anyway, the important thing is to start well tomorrow, in the race. The race pace is good, as is the rider’s feeling with the bike.”

“It’s a shame how things went, but that’s how it goes. I gave my all both this morning and this afternoon. I’m tenth, just a few tenths from the sixth and seventh positions. I wasn’t able to do a lap like I needed with the soft tire; just consider that my best time was set with the hard. I would have liked to start from the third row, but anyway, my starting spot isn’t so terrible. I’m convinced that I can have a good race.”

“What a nice track, and even if the results suggest otherwise, I was able to improve my time quite a bit. Having one less session hurt us a little more than the other riders, who already knew the track. I’m sure that tomorrow I’ll manage to further lower my time, and since we’re all very close, anything can happen. For being here for the first time, it didn’t go so badly.”