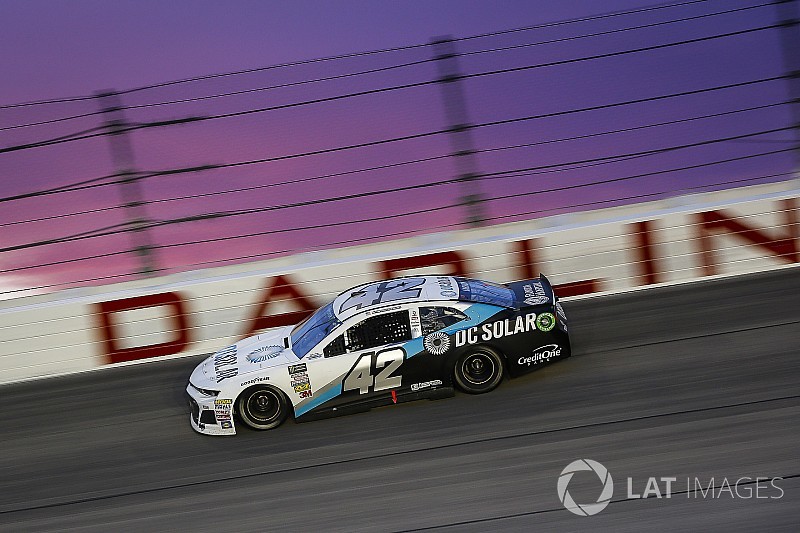 This time, though, there may be a silver lining that could prove dividends in a very important way.

Larson dominated much of Sunday night’s Southern 500 at Darlington (S.C.) Raceway, winning the first two stages and leading a race-high 284 of 367 laps.

But on the final pit stop, Brad Keselowski just edged Larson off pit road and on the restart with 19 laps remaining, Keselowski was able to move out to a sizable lead as Larson lost the battle for second to Keselowski’s teammate, Joey Logano.

“It stings, for sure, to not win at a prestigious race like this. I want to win every race, but I want to win a Southern 500 really bad,” Larson said. “That was the first time (Keselowski) was out front all race long. He showed that he was really fast in clean air.

“I think if I could have been the control car for that restart – he beat me by just a nose off of pit road and kind of won the race. I was really loose in traffic behind those guys trying to run hard. Even when I’d catch lap traffic, I’d get extremely loose.”

This was the seventh time in 25 races this season Larson has finished second or third. It’s also the third time he’s led the most laps in a race only to miss out on a trip to Victory Lane.

And there is no better time to be showing gains – particularly in race-winning speed – then as Larson prepares to do battle with the “Big 3” of Kevin Harvick, Kyle Busch and Martin Truex Jr. in the playoffs, which begin in two weeks.

“I feel like the last, I don’t know, two months or so, the other Chevy teams have really found some speed, RCR and Hendrick especially, with Chase (Elliott) winning, (Alex) Bowman has been running good,” Larson said. “I feel like we’ve kind of been stale up until this weekend.

“We had a good test at Richmond (last week). We learned some things with some different components, and I felt like it really helped our car there. “Chad (Johnston, crew chief) called back to the shop to get the primary (car) for here swapped over to kind of how we had it for Richmond, and was hoping that it was going to show some speed here, which it did.

“This is a good time of year to get some speed going before the playoffs where we haven’t had speed the last few months.”