Driver of the No. 8 Dale Earnhardt, Inc. Budweiser Chevrolet, Dale Earnhardt, Jr., was docked 25 championship driver points and fined $10,000 for use of foul language on live network television. The slip of the tongue came after Earnhardt won the EA ...

Driver of the No. 8 Dale Earnhardt, Inc. Budweiser Chevrolet, Dale Earnhardt, Jr., was docked 25 championship driver points and fined $10,000 for use of foul language on live network television. The slip of the tongue came after Earnhardt won the EA Sports 500 at Talladega Superspeedway this weekend. 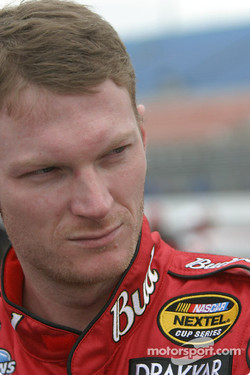 "I think we're the only sport that takes points off of the board after they've been scored," expressed DEI Director of Competition, Richie Gilmore "The popularity of this sport is based on colorful personalities and the fact that everyone can relate to these drivers and their emotions.

"Now, it seems like that's a detriment. Dale Jr.'s comment was made in the excitement of the moment, seconds after he climbed out of the car. It wasn't made in anger or hostility directed at anyone. This whole incident is going to force everyone in the sport to rethink showing any excitement in what should be a jubilant moment."

The win had put Earnhardt into the points lead. The reduction of points slips him to second place, 12 points behind new leader, Kurt Busch.

"It's unfortunate," stated Busch when he learned about the penalty. "The emotions in victory lane overcame him. He (Earnhardt Jr) was the dominant car all day and deserved to win. Hopefully, these 25 points won't come into the final factor because we want to beat him on the race track."

NASCAR cited that Earnhardt was in violation of Section 12-4-A (Actions detrimental to stock car racing) of the NASCAR Nextel Cup Series Rule Book for using inappropriate language.

Dale Earnhardt, Inc. racing plans to appeal the decision. Gilmore informed the media that a point reduction of this magnitude could cost the 29-year-old favorite son of NASCAR his first championship title.

"This is a huge setback for the entire company. We're in a sport that focuses its primary attention on the final 10 races of the season and we're racing against formidable teams for a championship. We're facing a setback from a competition standpoint for something that should be considered a personal foul," stated Gilmore. "We have no choice but to appeal the points portion of the penalty."

"We've had hundreds of calls from fans that support us. Our sponsors have vowed their support as well. If nothing else, we can look back at this race and always remember it as one where we were reminded of the loyalty everyone has toward Dale Jr., the #8 team and our company," added Gilmore who spoke for the entire team and driver Earnhardt. Jr.