Talladega, Alabama -- Same story different day as DEI's Dale Earnhardt Jr. won the restrictor plate race at Talladega. With the win, Earnhardt Jr. now has three straight wins on the historic superspeedway. For the second year in a row, the driver of ...

Talladega, Alabama -- Same story different day as DEI's Dale Earnhardt Jr. won the restrictor plate race at Talladega. With the win, Earnhardt Jr. now has three straight wins on the historic superspeedway. For the second year in a row, the driver of the #8 Chevrolet also won an extra million dollars for himself and a fan with Winston's "No Bull Five" competition. 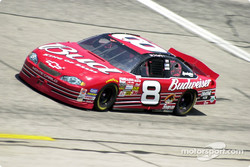 Today, he led 56 of the 188 laps on the 2.66 mile track. "We had a good car . I was really surprised Tony stuck with me. Thing about it was as the pack thinned down, it is hard t push a guy passed the leader. I was having a good . The car would do just about everything I asked it to. I can't complain, I'm just holding the wheel."

For the third week in a row, we have a new leader atop the point standings. Joe Gibbs Racing's Tony Stewart now holds the top spot after bringing home a second place finish. Stewart had three DNFs in his previous restrictor plate starts this year.

The points saw more then a new leader throughout the course of the day. The entire top five got shuffled after contenders Jeff Gordon and Jimmie Johnson were plagued with problems.

Johnson entered Talladega on the pole as the points leader, but during the pace laps before the green flag fell, something on Mark Martin's #6 Ford appeared to lock up the steering. Martin's car shot up track towards the wall before veering down track into the front of Jimmie Johnson's 48 Chevy. Martin was black flagged one lap before the start and was forced to his pits. Johnson stayed out to take the green but he pitted one lap later to check fender rub on the front tire. Both Johnson and Martin fell one lap down to the leaders within laps.

Gordon on the other hand, had a great day going early. He led a large part of the race before losing the lead and falling back in the pack on lap 126. On lap 128, his #24 crew pushed his Chevy behind the wall after loosing a retainer in a valve spring which caused the car to go down on cylinders.

It was a tough day for engine builders at Hendrick Motorsports. Gordon wasn't alone in the failed engine department. Teammates Joe Nemechek, Terry Labonte and Johnson also lost power. MBV-MB2 teammates Ken Schrader and Johnny Benson were running Hendrick engines for the 500-mile event. They joined the Hendrick bunch in the garage as retirees from the race.

With NASCAR's enforcement of a 13 gallon fuel cell compared to the usual 22, the length of a run was narrowed down to which team could get the best fuel mileage on the day. The reason for the smaller fuel cell was to cause more pitstops so the field would not be as bunched up, hoping to avoid the usual "big wreck."

Despite the fuel cell change, the field went through the round of stops and spaced out; but only for a few laps. Cars that would pit together, hooked up and drafted together. The big packs continued but luckily, the most important thing, the big wreck never came. The field ran the entire 500 laps minus a single caution flag.

With the 13 gallon fuel cell forcing more pit stops, ppi's Ricky Craven was the first to surrender to his crew for a quick stop. Craven dropped in on lap 32 and was followed by the lead pack of cars including Jeff Gordon, Rusty Wallace, Tony Stewart, all on lap 36.

The second round of pitstops came on lap 66 with the Ford of Craven once again being one of the first cars to make a stop. The Evernham Motorsports cars of Bill Elliott, Jeremy Mayfield and Casey Atwood also made their pitstops on lap 66. The Dodge camp appeared to struggle more then the other manufacturers with the longevity of their fuel runs. The DEI cars were able to stretch their fuel mileage to 38 laps, compared to Craven and Evernham's 32 lap runs.

With more pitstops and no cautions, those who ended the race a lap or more down did so by having bad stops. Dave Blaney was the first to experience troubles. On laps 71 and 137 he stalled the car and had to be pushed to refire. On lap 110, RCR's Kevin Harvick lost two after running out of fuel under the pitstop exchange. Rookie Jamie McMurray, making his first start in Sterling Marlin's #40 Dodge also ran out of gas and stalled his car during the refueling on lap 105.

Earnhardt's DEI teammate Michael Waltrip is generally linked to the #8 on the restrictor plate tracks. But Waltrip suffered troubles in the pits with 38 laps remaining after the car fell off of the jack. His day however, wasn't a complete wash. He still managed to pull out an eighth place finish.

NASCAR Next Gen “designed” for COTA challenge, despite limited practice

Kyle Larson to race for McLaren-Hendrick in 2024 Indy 500